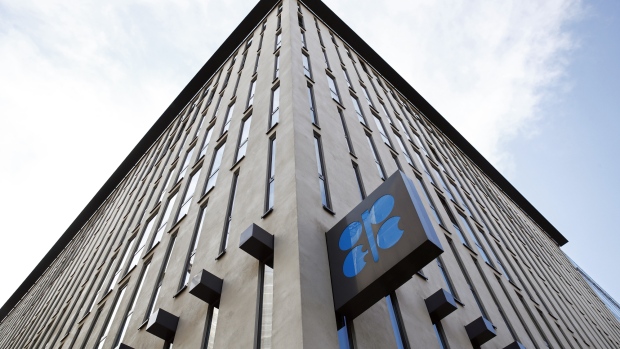 An OPEC sign hangs outside the OPEC Secretariat ahead of the the 174th Organization Of Petroleum Exporting Countries (OPEC) meeting in Vienna, Austria, on Thursday, June 21, 2018. The odds of OPEC reaching an oil-production deal increased as Iran edged away from a threat to veto any agreement that would raise output and Saudi Arabia put forward a plan that would add about 600,000 barrels a day to the global market. , Bloomberg

As ministers from OPEC and its allies arrive in Vienna for crucial talks, all have made clear they agree on the need for a cut in oil production. But none have explained how they’ll turn that desire into a reality.

With just a day to go before a critical OPEC summit, Saudi Arabia and Russia are set to meet Wednesday for make-or-break preparatory talks that’ll set the direction for the oil market. The stakes are high after prices suffered their largest monthly drop since the global financial crisis in November, and politicians including Donald Trump call on OPEC to keep energy prices in check.

“There is little disagreement among OPEC members over the need to cut, but there is not yet consensus over how much,” said Amrita Sen, chief oil analyst at consultant Energy Aspects Ltd. “Communicating a large cut, if one can be agreed upon, will still be fraught with challenges given complicated U.S.-Saudi relations.”

In an interview Tuesday, Saudi Energy Minister Khalid Al-Falih cautioned that a deal wasn’t yet done, saying it’s “premature” to suggest the OPEC+ group -- which includes allies Russia and Kazakhstan -- will agree to curtail output. That’s less bullish than statements he made a month ago in Abu Dhabi calling for 1 million barrels a day of cuts. Crude gave up much of its gains on Tuesday following his comments, and fell as much as 2.1 per cent on Wednesday.

“We need to get together and listen to our colleagues, hear about their views on supply and demand,” Al-Falih said on the sidelines of United Nations climate talks in Katowice, Poland, before traveling to Vienna, where he arrived early Wednesday. “The next road to cross is whether all countries are willing to come on board and contribute to that cut.”

The last time the OPEC+ group agreed to curb output, in late 2016, it settled on a combined 1.8 million-barrel-a-day reduction. In preparatory meetings ahead of this week’s summit, delegates have said a cut of as much as 1.3 million barrels a day next year is needed as demand growth slows and U.S. shale production surges.

The opportunity for countries to put their cards on the table comes Wednesday at the Joint Ministerial Monitoring Committee, the panel that oversees the 2016 deal. Both Al-Falih and his Russian counterpart, Alexander Novak, will attend that meeting, a day ahead of the full OPEC gathering on Dec 6.

In private conversations, OPEC delegates have said that Russia and Saudi Arabia still differ on how to share the cuts.

Saudi Arabia has argued that Russian proposals implying a cut by Moscow of as much as 150,000 barrels day would leave the kingdom shouldering too much of the burden, and insisted there should be a more equal partnership, implying a figure closer to 300,000 barrels a day, people familiar with the talks said.

Another issue is the baseline for the reduction. Some nations want to have it at October output levels while others prefer sticking to the original deal, which used 2016 levels as the base.

It’s complicated further by Saudi Arabia and Russia having lifted their production to near-record levels in recent months. The kingdom is currently pumping 11 million to 11.2 million barrels of oil a day, Al-Falih said.

He said that while Moscow backs output curbs “in principle,” the OPEC+ group still needs to “figure out what needs to be done and by how much.”

Any final decision will need the blessing of Russian President Vladimir Putin and Saudi Crown Prince Mohammed bin Salman, who agreed over the weekend to extend their oil-market cooperation.

Trump also plays an important role. He’s waged a Twitter campaign against OPEC, demanding producers keep pumping to bring down gasoline prices for U.S. consumers. Saudi policy makers may be reluctant to go against him after the murder of Jamal Khashoggi unleashed a fusillade of criticism from American lawmakers, leaving the president as one of Prince Mohammed’s few remaining allies in Washington.

OPEC’s work has, however, been made easier by Canada, where the oil-rich province of Alberta this week announced output curbs of 325,000 barrels a day because of a pipeline bottleneck. That may allow OPEC to deliver a smaller-than-planned reduction while dressing it up as a significant cut.