Oil rose as OPEC and its allies were said to plan talks on fresh production cuts next year, responding to recent increases in crude inventories amid surging U.S. supply.

Futures in New York gained 0.6 per cent. Ministers from the Organization of Petroleum Exporting Countries gathering in Abu Dhabi this weekend will discuss options for 2019 including the scenario of supply curbs, delegates said. That would mark an abrupt end to six months of output increases, reflecting the prospect that U.S. sanctions on Iran won’t be deep enough to prevent another surge of American shale oil creating a new surplus.

Supply concerns that drove crude to a four-year high last month have faded on speculation President Donald Trump’s administration will soften the blow of its sanctions on Iran to lower pump prices at home. OPEC, led by Saudi Arabia, also pledged to offset any supply gaps, while the U.S. has forecast that its own oil output will increase at a record pace this year.

“The Saudis want to stop the price decay,” said Giovanni Staunovo, an analyst at UBS Group AG in Zurich. “There are many moving variables until the OPEC meeting in December, like Iran and U.S. production growth. But as the Saudis say they aim for market stability, if the data suggests an oversupplied market next year the probability of a cut is high.”

West Texas Intermediate crude for December delivery advanced 37 cents to US$62.58 a barrel on the New York Mercantile Exchange at 9:18 a.m local time. Total volume traded was 61 per cent above the 100-day average.

Brent futures for January settlement climbed 76 cents to US$72.89 on the London-based ICE Futures Europe exchange, after falling 1.4 per cent on Tuesday. The global benchmark crude traded at a US$10.13 premium to WTI for the same month.

If OPEC, led by Saudi Arabia, does ultimately decide fresh cutbacks are necessary, it will confront a number of challenges. It will need to once again secure the support of rival-turned-partner Russia, which has less need for high oil prices. There’s also the risk of antagonizing the kingdom’s key geopolitical ally, President Trump.

In the U.S., industry data were said to show that nationwide crude inventories rose last week, expanding by 7.83 million barrels. The median estimate from a Bloomberg survey of analysts puts the gain at 2 million barrels ahead of government data later Wednesday.

Other oil-market news: Pioneer Natural Resources Co., one of the top oil producers in the U.S. Permian Basin, plans to increase its hauling capacity in the biggest North American field by 12 per cent this month as rival explorers struggle with bottlenecks. U.S. waivers for Iranian oil purchases are likely to be more extensive than the market expects, with the combined range seen at 1.2 million to 1.7 million barrels a day, FGE Chairman  Fereidun Fesharaki said in a note. The  Cboe/Nymex Oil Volatility Index gained 6.5 per cent on Tuesday, rising for a fourth straight session, to the highest level since May 2017. 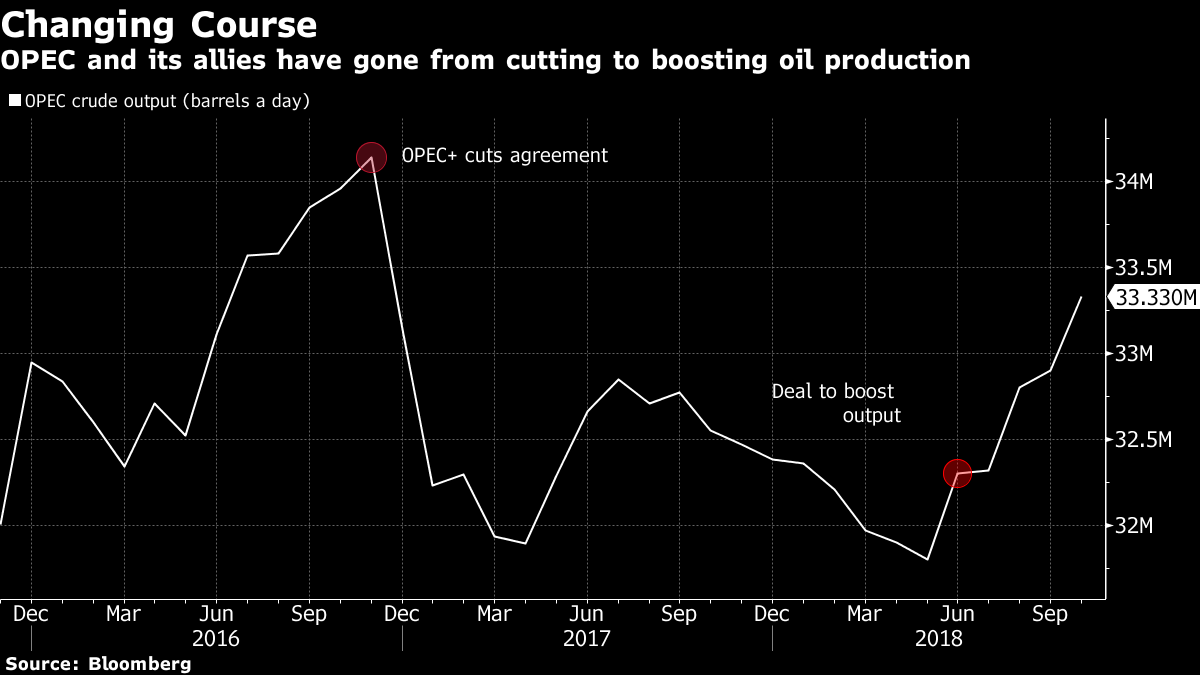