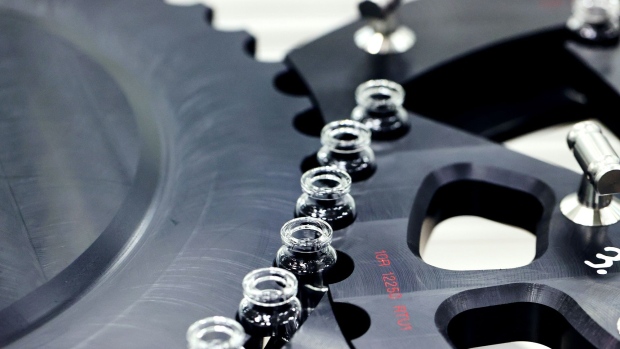 Glass vials pass through a production line cog-veyor at the Gerresheimer AG medical glassware factory in Buende, Germany, on Tuesday, Aug. 11, 2020. Gerresheimer has built up capacity and most of its factories are operating around the clock as the company holds talks with pharma companies, working on a coronavirus vaccine. Photographer: Alex Kraus/Bloomberg , Bloomberg

European regulators are set to start an accelerated review of a COVID-19 vaccine front-runner from the University of Oxford and AstraZeneca Plc, according to a person with knowledge of the situation, in a sign the shot could be the first to seek approval in the region.

The European Medicines Agency is expected to announce the “rolling review” as soon as this week, according to the person, who didn’t want to be identified because the decision is still private. Such assessments are used in emergencies to allow regulators to see trial data while the development is ongoing to speed up approvals of drugs and vaccines that are urgently needed.

The move would be a key step forward for the Oxford-AstraZeneca shot after trials were halted earlier this month due to concerns about a participant in the U.K. study who became ill. The partners, along with companies such as Pfizer Inc. and Moderna Inc., are sprinting ahead with experimental shots as governments look for a way out of the global crisis.

The death toll from the disease exceeded 1 million this week, while the infection rate has rapidly picked up again in Europe.

While the British regulator cleared the Oxford-Astra trial to restart less than a week after it was paused, U.S. authorities have yet to give the go-ahead for trials to resume in the country. Studies in South Africa, Brazil and India have also restarted.

The EMA’s head of vaccines, Marco Cavaleri, said in July the agency would start rolling reviews of potential candidates after the summer. The approach means that a final approval could be granted a matter of days after the review period ends. Cavaleri said at the time the first approval of a vaccine could come by the end of the year.

In a normal environment, drugmakers submit trial data to the regulator for a review that can take many months. Once that’s complete, an opinion is given on whether the product should be authorized for use, which must be signed off by the European Commission.

In emergencies like a pandemic, a rolling review avoids delays so that an EMA recommendation and approval from the European Commission can be sought as quickly as possible. The agency started such an evaluation of remdesivir to treat COVID-19 in April, while trials were ongoing, and the drug was given conditional approval three months later.

“EMA has always stated that it will communicate the start of a rolling review for COVID-19 treatments or vaccines,” it said in a statement. “We have not made such an announcement for a vaccine.”