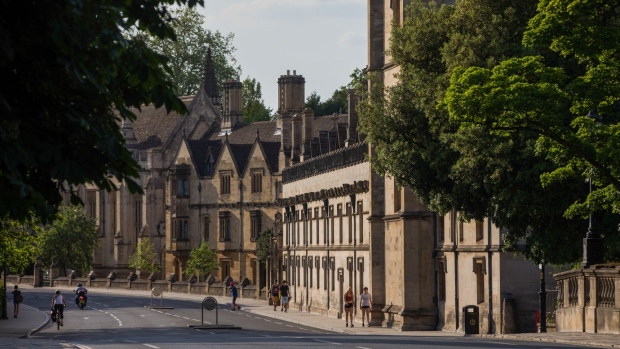 Pedestrians and cyclists pass Magdalen College, part of Oxford University, in Oxford, U.K., on Wednesday, May 27, 2020. The U.K. government's plans to allow most stores to reopen can't come soon enough for retailers, with new figures showing the ongoing damage from the lockdown. Photographer: Chris Ratcliffe/Bloomberg , Bloomberg

(Bloomberg) -- Building firms risk hefty fines from Britain’s antitrust watchdog after an initial probe found they ripped off customers such as the University of Oxford and department store Selfridges by rigging bids for contracts worth more than £150 million ($183 million).

The Competition and Markets Authority said 10 UK construction firms illegally colluded on bids for demolition and asbestos-removal contracts, according to a statement Friday outlining the regulator’s provisional findings. Eight of the businesses admitted to the bid rigging.

The collusion affected 19 contracts for demolition work in London and England’s Midlands and also included contracts for a Metropolitan Police training college, a court building, and offices on London’s Southbank. The businesses used the practice to hoodwink customers into thinking they were getting competitive prices.

“The construction sector is hugely important to Britain’s economic well-being,” Michael Grenfell, the CMA’s executive director for enforcement, said. “Bid rigging can result in worse deals, which can leave businesses –- and sometimes taxpayers –- out of pocket.”

Some of the construction firms were also provisionally found to have been involved in an agreement where the contract loser was compensated by the winner -- with one example more than £500,000.

The investigation, which was started by the watchdog in 2019, shows the CMA’s willingness in recent years to pursue more enforcement cases at a quicker pace. The agency clamped down on cartel activity from Elite Sports, JD Sports Fashion Plc and Rangers Football Club Ltd. earlier this month.

The CMA said it would fine the companies if a final decision confirms they broke the law and the amount will be decided at the end of the investigation.