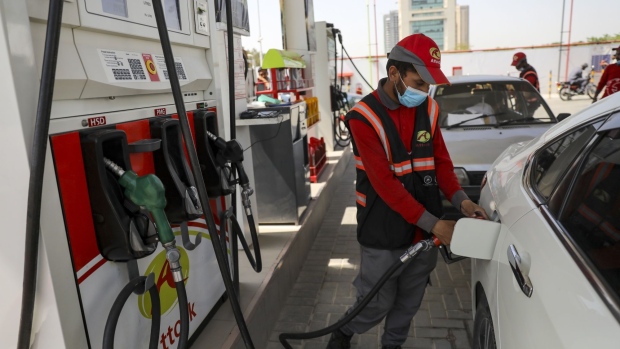 An attendant fills up a vehicle with gasoline at an Attock Petroleum Ltd. gas station in Islamabad, Pakistan, on Saturday, April 2, 2022. Pakistan Prime Minister Imran Khan said he will face a no-confidence vote on Sunday amid reports that the opposition has garnered the numbers it needs to oust him from office, raising political uncertainty as the country grapples with high inflation and debt repayments. , Bloomberg

(Bloomberg) -- Pakistan’s government increased local fuel prices from Friday to meet a key condition set by the International Monetary Fund for reviving its bailout program after talks with the multilateral lender ended inconclusively the day before. Markets gained.

Prime Minister Shehbaz Sharif said parliament will decide the next election timeline in a speech to the lower house. Ousted premier Imran Khan repeated demands for the government to call for fresh elections in six days, failing which he will return to Islamabad to stage a sit-in with two million people.

Pakistan’s rupee, stocks and dollar bonds rose after the country got closer to reviving its bailout from the International Monetary Fund after raising fuel prices, a key condition. The nation’s rupee rose 0.7% to 200.5 a dollar in intraday, according to Arif Habib’s foreign exchange desk.

Now isn’t a good time to be long Pakistan despite the cheaper valuations, analysts including Belle Chang and Simon Waever write in research report. “We therefore suggest a dislike stance as we would expect it to also lag in a broader EM rebound,” they said.

Khan said in a series of tweets that the fuel price hike was the highest in the country’s history and Pakistan’s government hasn’t pursued a deal with Russia for 30% cheaper oil.

The government was already mulling gas import deals with several countries, including Russia.

Pakistan raised the cost of gasoline and diesel by 30 rupees a liter each, Finance Minister Miftah Ismail said in a Twitter post. The decision comes a day after the two sides ended week-long talks without reaching an agreement to revive the stalled loan.

Dollar bonds from Pakistan were among the worst in emerging markets on Thursday, halting a three-day winning streak after talks with the International Monetary ended inconclusively. The nation’s 2051 note fell by about half a cent to 60.2 cents on the dollar, according to indicative price data collected by Bloomberg.

“Despite, in the IMF words, ‘considerable progress,’ the sticking point remains the fuel and energy subsidies,” Tellimer’s Patrick Curran and Hasnain Malik wrote in a note Thursday. “No party disagrees with the need for the IMF, but no one wishes to bear the political cost of cutting subsidies.”

Strategists at the research firm kept a buy recommendation on the bonds as they see recovery values near or above current prices, they wrote.

Pakistan’s foreign exchange reserves decreased by $75 million to $10.1 billion in the week ended May 20, according to a central bank statement.

The nation’s reserves have dropped to cover less than two months of imports.

“Pakistan has a very short window to get its political house in order and make the tough decisions required. Otherwise it can get into a vicious spiral, starting with a free-falling currency,” said Abdul Kadir Hussain, head of fixed-income asset management at Dubai-based Arqaam Capital.

Arqaam has reduced its exposure in Pakistan this year amid mounting economic pressures. Pakistan Prime Minister Shehbaz Sharif has not raised fuel prices, a prerequisite for resuming its loan program with the International Monetary Fund.

Pakistan’s parliament, which has more than a year to govern, will decide the next election timeline, Prime Minister Shehbaz Sharif said in the parliament’s lower house, called the National Assembly.

The country will not be held to the “dictation” of ousted former premier Imran Khan who is pushing for early elections, Sharif said.

The National Assembly passed an amendment that will remove the use of electronic voting machines and disallow Pakistanis living overseas from voting. The bill will be sent to the Senate on Friday, local media reported.

Former premier Khan has often drawn support from Pakistanis outside the country. His party, Pakistan Tehreek-e-Insaf, is now pushing for elections a year earlier.

Pakistan said it is considering to sign a liquefied natural gas purchase agreement with various countries including Russia as it seeks to secure supply and ease a crippling shortage.

The government “will go for the most favorable deal,” the Ministry of Energy said in a statement to Bloomberg News. Pakistan is mulling a government-to-government contract to import the power plant and industrial fuel, according to the statement.

Pakistan’s benchmark KSE-100 Index rose as much as 1.1%, the most in almost two weeks, after Khan called off the protest for now. The stock market is taking a “breather from the recent battering,” said Qasim Shah, head of international sales at JS Global Capital Ltd.

Pakistan’s rupee fell 0.3% to 202.5 a dollar in intraday, it’s 16th consecutive drop. The nation was not able to resume its loan support from the International Monetary Fund with talks ending inconclusive.

Neuberger Berman is underweight on Pakistan bonds amid potential higher volatility, even as the money manager expects the nation will win a bailout deal with the International Monetary Fund and avoid a default.

“While we do see parallels in Pakistan and Sri Lanka, we think Pakistan will be able to avoid default as the country is already under a funded IMF program and hence, has a potential path out of the current situation,” said Michael Reyes, a portfolio manager at the company in Singapore.

A five-member bench of judges is hearing the petition.

Finance Minister Miftah Ismail said the government is also committed to putting Pakistan back on a “sustainable growth path.”

Commenting on talks with the IMF earlier this week, Ismail said the officials from the multilateral lender emphasized the importance of “rolling back fuel and power subsidies.”

Both sides looked at “significant slippages” in FY2022, caused in part by the fuel subsidies, Mitfah said, adding that targets for the next financial year were also discussed.

“In the light of high inflation, declining forex reserves and a large current account deficit, we would need to have a tight monetary policy and consolidate our fiscal position. Thus govt is committed to reducing the budget deficit in FY23,” he said in a Twitter thread

Ex-premier Imran Khan demanded the government announce elections in six days or else he will return to Islamabad with two million people for a sit-in. The government is unable to handle a deteriorating economy, he added.

Pakistan will not accept a U.S.-backed government, Khan said in an echo of earlier allegations that Sharif and other parties orchestrated his ouster with help from the Biden administration. Washington has repeatedly denied this.