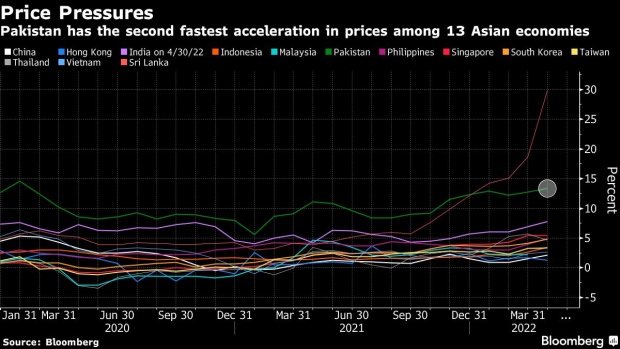 State Bank of Pakistan raised the benchmark target rate by 150 basis points to 13.75%, it said in a statement on Monday. Only seven of 42 analysts in a Bloomberg survey had predicted the move, with most expecting a 100 basis point increase.

“This action, together with much needed fiscal consolidation, should help moderate demand to a more sustainable pace while keeping inflation expectations anchored and containing risks to external stability,” the central bank said.

High global commodity prices and rising imports have stoked inflationary pressures for the country. Consumer prices rose over 13% in April while its currency plunged past 200 a dollar last week for the first time ever amid a dollar shortage. Pakistan’s foreign exchange reserves of $10.2 billion cover less than two months of imports.

Policymakers are in talks with the International Monetary Fund over conditions for accessing the $3 billion payout pending from a loan program. Finance Minister Miftah Ismail on Monday said Pakistan may have to raise interest rates to battle soaring inflation but cannot afford to raise fuel costs.

Doing away with subsidies on fuel and electricity was seen as a key condition to secure the loan from the multilateral institution. Pakistan’s former Prime Minister Imran Khan has called for a sit-in in the capital starting Wednesday to force elections amid mounting public anger over high prices, a move that could stoke further political instability.

Before today’s action, Pakistan had raised borrowing cost by 525 basis points from its pandemic-era low.