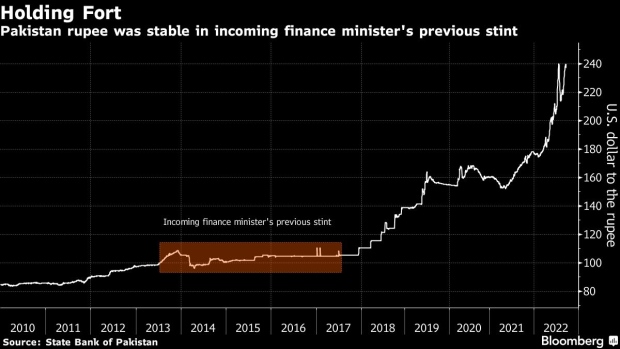 (Bloomberg) -- Pakistan’s rupee closed its best day in six weeks after reports that Ishaq Dar, known for his preference for a stronger currency, will be returning as finance minister.

The rupee gained 1.1% to 237.02 a dollar at close, strengthening as emerging-market peers continue to be pummeled by a strong dollar. The nation’s benchmark stock index gained 1.3%, the most in almost a month too.

Dar confirmed the appointment speaking to reporters in a televised comments in London late Monday. He will replace Miftah Ismail who was appointed in April.

Dar, an accountant by profession, had led the finance ministry three times in the past. During his last stint as finance chief from 2013 to 2017, he managed to keep the rupee stable. It was the most stable currency in Asia between 2014 to 2017, according to data compiled by Bloomberg.

“My aim will be to break contraction in the economy and change its direction,” said Dar.

Pakistan economy that was already slowing down had seen a further cut in its growth forecast for the current fiscal year to 2.3% earlier this month following the floods from 5% in June. Dar wants to change the course to high growth, low interest rate and a stable rupee, he said.

“Dar is known to keep a close watch on rupee depreciation and had earlier hinted at strict action against speculators to strengthen the currency,” said Faisal Bilwani, head of international sales at Alfalah CLSA Securities Pvt.

Pakistan has already sought to clamp down on currency speculation after the rupee plunged even after the nation secured $1.1 billion from the International Monetary Fund to avert a default.

Earlier this month, eight banks were investigated for quoting very high rates on some currency transactions. The rupee has declined by 35% this year.

It will be interesting how Dar’s anticipated approach in managing the rupee will be perceived by the IMF that supports a flexible, market-determined currency.

(Updates with Dar comments throughout the story)