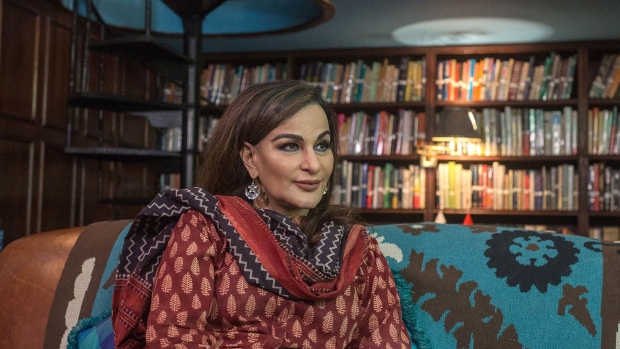 (Bloomberg) -- Sherry Rehman, the minister for climate change in Pakistan, knows that her country is playing a crucial role in setting the agenda at COP27 this year. And she weighs her words carefully when pushing for Pakistan’s goals.

South Asia’s second-largest country has faced multiple climate disasters this year, from deadly springtime heat to summer deluges that killed 1,700 people and caused $30 billion in damage. The country ranks 147th out of 182 countries scored by their vulnerability to climate change and readiness for it. Pakistan’s unfolding nightmare set the scene for Day One of COP when, for the first time ever, delegates agreed to discuss officially “loss and damage,” or how rich countries can help pay for the damages caused by global warming elsewhere.

“I think Pakistan has been quite successful in being able to put the contested idea and issue of loss and damage already on the agenda,” Rehman said at a panel on Friday, at the end of the first week of the conference in Sharm El-Sheikh, Egypt.

She’s 61, and this is Rehman’s first climate post. Yet now Pakistan’s climate minister has been careful for what she asks for — and time is ticking down in the summit’s second week to reach an agreement.

At the bare minimum, developing countries want to set up a new “facility,” or program, to provide technical assistance and funding to address climate-related losses and damages. The aim is to have a clear road map toward that goal finalized by the end of the summit. Others are pushing for funds to start being delivered immediately to countries hit by recent disasters.

Language is crucial at UN climate summits, and some activists and NGOs are asking for countries like Pakistan to be more forthright in their demands. Some expected to see Rehman call directly for reparations. “We are not asking for reparations,” Rehman told an attendee of the panel session at the Pakistan pavilion. “It sounds really good. It’ll get you into all the headlines. I’d be a real hero.”

But that’s not how Rehman sees the process working. While she isn’t a negotiator — one of the diplomats who haggle and spar over technical agreement language — she is bound by the soft rules that govern the UN climate process, which includes nearly 200 countries and requires consensus. Impassioned calls for reparations just aren’t a productive way to try and “keep the country in the discussions, to be responsible players at COP, which let me remind you is one vote, one country,” she said. “One veto, one country. We would be laughed out of the room as irresponsible activists.”

In short: If any country steps out of line, nothing would be easier for any of the others to halt progress because of it. It’s the UN climate process as a game of chicken, with 200 players trying not to blink.

Before becoming climate minister in April, Rehman worked a journalist, author, legislator, think-tank founder, diplomat and now senator, all of which rewarded her skills of rhetoric and persuasion.

It was former Prime Minister Benazir Bhutto who encouraged Rehman to join politics, given the strength of her writing and public appearances. At first Rehman pushed back. “I said [to Bhutto], I’m used to just telling truth to power,” Rehman said in a wide-ranging interview in Karachi before COP27. “And she said, ‘That's exactly what I want. I don’t want courtiers.”

Rehman won a seat in the National Assembly in 2002 as a member of Bhutto’s Pakistan Peoples Party, and in the past two decades has become a consistent advocate for the rights of women, the vulnerable and the free press. “I invariably, without even planning to, fall in with voices that are vulnerable,” she said in the interview. “I tend to speak out on their behalf. Even my family has noted that ‘You butt yourself into fights that are not always your own.’ But I think that’s the whole point of being in public service.”

It’s just that activist rhetoric is a poor way to serve the vulnerable in a diplomatic setting. While she has credited Pakistan with putting the loss-and-damage debate on the official COP27 agenda, Rehman also identified it as the third priority for the COP, behind pushing adaptation to the top of the UN climate agenda and more general reforms to international climate finance.

To be sure, Pakistan has faced criticism for underinvesting in infrastructure — which has made impacts of recent climate-driven catastrophes worse. The country was pushed to the brink of default this summer because of the flooding, and its financial problems may make it more difficult to make the investments needed to future proof the country from further disasters.

Still, Rehman’s Pakistani colleague, Nabeel Munir, who is the top negotiator for the G77+China, which Pakistan chairs this year, knows progress on loss and damage is really what people back home want to see. “We really, really need to work with completely focusing our energies on producing something in this COP27 something that is tangible,” he said in an interview last week. “Something that we can take home and tell our people that we've been able to achieve something.”

Rehman moves through 14-hour days of meetings and speeches at COP27 bearing few outward signs of effort. When she’s not in a meeting, walking to her next meeting or speaking, she’s tapping away at her phone. With 1.3 million Twitter followers, Rehman is already something of a climate celebrity. She’s also immediately recognizable among an all-male entourage.

With signs that whatever deal is agreed on loss and damage may be watered down to appeal to multiple parties, Rehman told those who turned out to see her speak at the Pakistan pavilion last Friday that it would wrong to not accept incremental progress. “It’s really stylish to walk away from the increment but I've never walked away from it,” she said. “I'm a woman. I take what I can get, alright. Nobody gives it to me.”

(Updates with details on Pakistan’s financial problems in the 13th paragraph.)