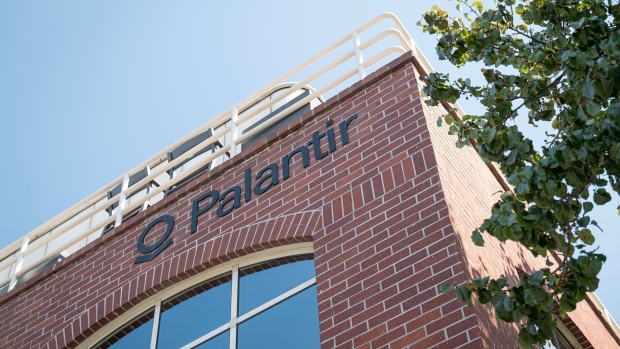 (Bloomberg) -- Palantir Technologies Inc. shares fell as much as 15% after the data software company forecast annual sales and profit that fell short of analysts’ estimates.

The outlook reflects the sharp challenge facing the data software company when fewer customers are willing to open their wallets. The stock decline Monday was the biggest intraday drop since May, when the company last reported financial results.

Increased competition from Snowflake Inc. and other software companies, particularly those with a larger cloud presence, could hamper Palantir’s ability to sell to businesses, and additional salespeople could notably compress its operating margin, according to Damian Reimertz., a contributing analyst to Bloomberg Intelligence.

Alex Karp, the chief executive officer who co-founded the company with the billionaire Peter Thiel, was dismissive of concerns about the second-quarter performance. “We run this company as owners,” he said on a conference call with analysts Monday. “We don’t run it quarter to quarter.”

Since getting its start in 2004 selling data analysis tools to the US Central Intelligence Agency, Palantir has won dozens of contracts with other government agencies in the US and in allied countries. Government customers have used its software to respond to the Covid-19 pandemic and catch tax cheats and, more controversially, to aggregate public health records and carry out immigration enforcement.

Palantir’s commercial business remains smaller than its government one, and expanding that unit has become a top priority and taken on increased urgency since going public in 2020. Palantir told Bloomberg this month it will increase total headcount by an estimated 25% this year, with a heavy focus on expanding its commercial sales team.

Just 42 salespeople in the US are driving Palantir’s revenue right now, Karp said. Palantir employs more salespeople than that, but only 42 have “learned” the product thus far, he said. And they’re persuasive, Karp said. “We’ve brought some customers back who, quite frankly, didn’t like us, but the product brought them back,” he said.

The company’s commercial business, particularly in the US, was one of the few bright spots during an otherwise bleak quarter. Global commercial revenue increased 46% to about $210 million in the second quarter.

Total revenue in the period that ended in June increased 26% to $473 million, in line with analysts’ expectation.

Palantir lost $179 million during the quarter, significantly wider than analysts expected and than any other time since it first went public. The adjusted loss was $21 million, falling well short of the $91 million adjusted profit analysts anticipated. Karp, the CEO, said the strength of the dollar weighed on the results because 40% of Palantir’s business is outside of the US.

Karp expects Palantir to be profitable in 2025, he said on the conference call. The decision, just before going public in 2020, to relocate the company’s headquarters to Denver from Silicon Valley will help reduce costs substantially, he said.

(Updates with shares in the first paragraph.)