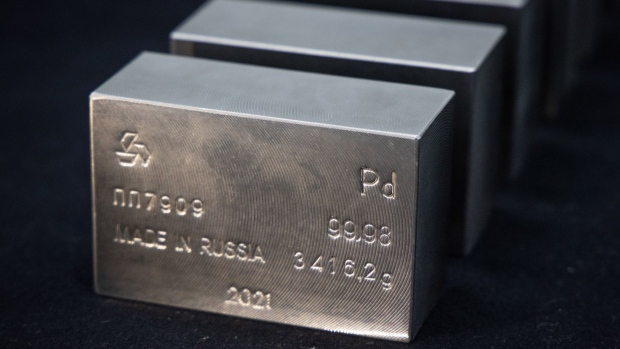 Palladium ingots at the Prioksky non-ferrous metals plant in Kasimov, Russia, on Thursday, Dec. 9, 2021. Bullion is heading for its first annual drop in three years as central banks start to dial back on pandemic-era stimulus. Photographer: Andrey Rudakov/Bloomberg , Bloomberg

(Bloomberg) -- Palladium extended gains after the suspension of two state-owned Russian refiners by the London market and the CME Group added to concerns about potential supply disruptions from the key producing country.

The precious metal’s latest rise, following a 8.7% surge on Friday, comes after the invasion of Ukraine and the sanctions that followed saw prices soar to a record last month. Russia produces about 40% of freshly mined palladium, which is mostly used in catalytic converters for gasoline-powered vehicles.

On Friday, the London Platinum & Palladium Market suspended Krastsvetmet and Prioksky Plant of Non-Ferrous Metals from its goods delivery and sponge accreditation lists. The LPPM’s announcement reverses its decision one month ago to continue letting the Russian plants supply precious metals to the trading hub. The CME then suspended the approved status for warranting and delivery of certain platinum and palladium brands from the two refiners until further notice.

In other precious metals trading, gold held an advance as investors sought a store of value amid the concerns over the economic fallout from the war in Europe and the inflation pressures from commodity-market disruptions.

Federal Reserve Bank of Cleveland President Loretta Mester said she’s confident that the U.S. will avoid a recession as the U.S. central bank tightens policy, though the inflation rate will probably remain at more than 2% into next year.

Holdings in exchange-traded funds backed by the precious metal are at the highest level in more than a year, according to initial data compiled by Bloomberg.