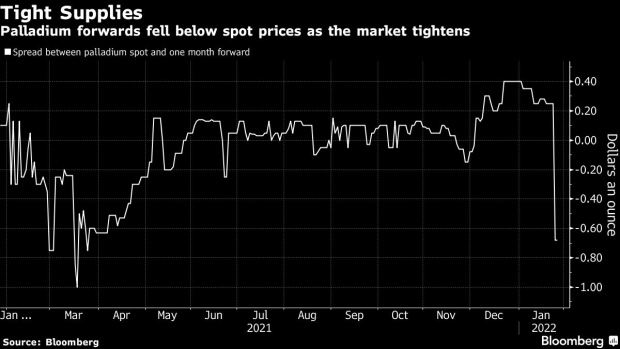 (Bloomberg) -- Palladium soared to the highest in four months, with traders looking to secure supplies amid growing tensions over Ukraine as Russia, the top metal producer, amassed troops near the border.

The metal that’s mostly used in catalytic converters rose as much 8.3% on Wednesday, extending this year’s rally to almost 25%. Tensions between Russia and the West over Ukraine have heightened concerns supplies may be disrupted, according to Henrik Marx, global head of trading at Heraeus Metals Germany GmbH & Co.

Russia has said it doesn’t plan to invade Ukraine. Diplomatic efforts are also under way to avoid any potential conflict.

It’s a sharp reversal in fortunes for palladium, which was the worst-performing major commodity in 2021. The impact of the semiconductor shortage on car production soured the demand outlook, causing prices to plummet in the second half of the year.

In the over-the-counter market, the metal has sunk rapidly into backwardation -- a market structure in which spot prices are higher than those for forwards -- signaling tightening availability. Palladium trading is very illiquid, which has historically caused rapid moves in its price.

Hedge funds trading the New York palladium futures may also have been caught short by the recent move, with commitment for traders data as of Jan. 18 -- the most recent available -- showing short interest near the highest since 2018. Those looking to close their positions would be forced to buy metal at elevated prices.

“I think its ‘squeezey’ and has the capability to run on geopolitical headlines and risk with no one willing to come in and provide the selling pressure to keep it capped,” said Nicky Shiels, head of metals strategy at MKS PAMP SA. “If it was really being squeezed, we would see a $1,000 rise in days given the illiquidity.”

Russia produces around 40% of freshly mined palladium. In the event of a conflict involving Ukraine, there is no indication that there will be sanctions against metals exports. The U.S. and EU have been weighing further sanctions on Russia’s biggest banks and are considering restricting the country’s ability to convert rubles for dollars in case of invasion, which may affect exports.