Chinese stocks listed in Hong Kong had their worst day since the global financial crisis, as concerns over Beijing’s close relationship with Russia and renewed regulatory risks sparked panic selling.

The Hang Seng China Enterprises Index closed down 7.2 per cent on Monday, the biggest drop since November 2008. The Hang Sang Tech Index tumbled 11 per cent in its worst decline since the gauge was launched in July 2020, wiping out US$2.1 trillion in value since a year-earlier peak.

The broad rout follows a report citing U.S. officials that Russia has asked China for military assistance for its war in Ukraine. Even as China denied the report, traders worry that Beijing’s potential overture toward Vladimir Putin could bring a global backlash against Chinese firms, even sanctions. Sentiment was also hurt by a COVID-induced lockdown in the southern city of Shenzhen, a key tech hub, and the northern province of Jilin.

That comes on top of a spate of regulatory worries. Tencent Holdings Ltd. is reportedly facing a possible record fine for violations of anti money-laundering rules, which pushed the stock down nearly 10 per cent on Monday. There’s also a risk of Chinese firms delisting from the U.S., as the Securities and Exchange Commission identified some names as part of a crackdown on foreign firms that refuse to open their books to U.S. regulators. 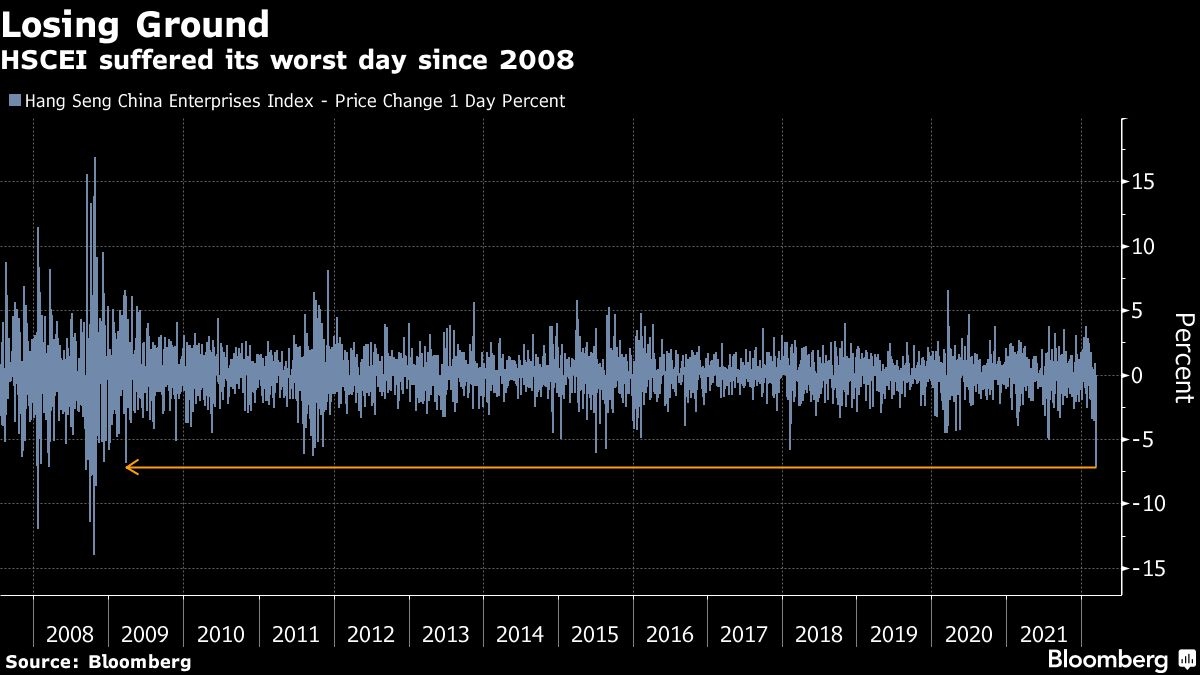 “If the U.S. decides to impose sanctions on China in total or on individual Chinese companies doing business with Russia, that would be a concern,” said Mark Mobius, who set up Mobius Capital Partners after more than three decades at Franklin Templeton Investments. “The whole story is still up in the air in this case.”

Investors have reason to be jittery after several big-name funds reported significant losses related to Russia. BlackRock Inc.’s funds exposed to Russia have plunged by US$17 billion since the war began.

On Friday, the Golden Dragon Index, which tracks American depository receipts of Chinese firms, slumped 10 per cent for a second consecutive day -- something that’s never happened before in its 22-year history. It fell 12 per cent Monday to its lowest level since July 2013. China’s benchmark CSI 300 Index closed 3.1 per cent lower on Monday. The onshore yuan also fell to its weakest in a month as sentiment toward Chinese assets turned sour.

“We don’t see a major catalyst in the near term,” to help China stocks, though earnings results may create some share price volatility, said Marvin Chen, a strategist at Bloomberg Intelligence. “For a material re-rating of China tech, we may need to see a shift in regulatory tone, and we didn’t get that from the recently concluded NPC meeting.”

Even amid the rout, mainland traders have continued to snap up Hong Kong stocks, though that’s proving insufficient to buttress share prices. They have been net buying Hong Kong equities via the stock connect in every session since Feb. 22, loading up US$1 billion on Monday, the most since January. 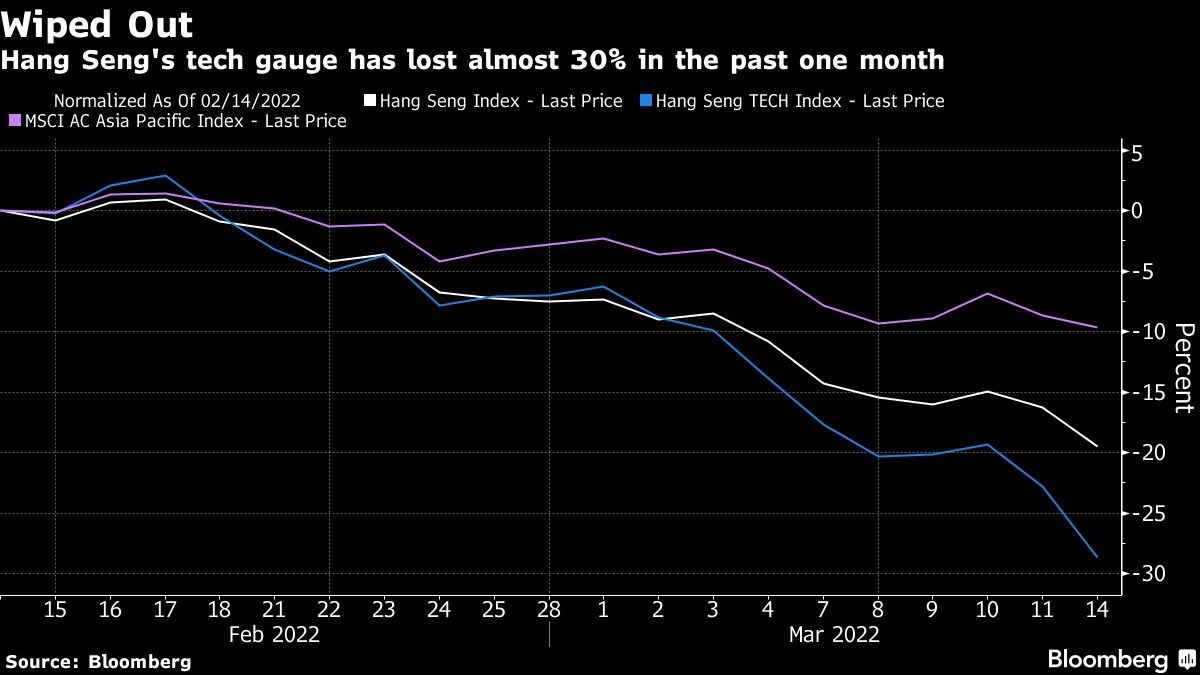 The historic slide in tech stocks is baffling China bulls, the number of which had grown this year as strategists bet on a rebound thanks to policy easing by the People’s Bank of China.

The MSCI China Index has seen its valuation more than halve from a Feb. 2021 peak. The gauge is trading at about 9 times its 12-month forward earnings estimates, versus a five-year average of 12.6.

“It’s true that the valuation is cheap but if you are desperately closing your positions, valuations don’t matter,” said Yasutada Suzuki, head of emerging market investments at Sumitomo Mitsui Bank.