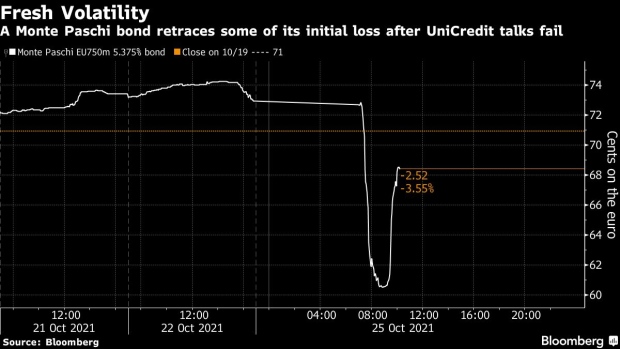 A pedestrian enters a Banca Monte dei Paschi di Siena SpA bank branch in Rome, Italy, on Monday, Feb. 4, 2019. A manufacturing and export-led slump in Italy's economy spilled into services at the start of the year, aggravating an already fragile economic situation in the euro area. Photographer: Alessia Pierdomenico/Bloomberg , Bloomberg

(Bloomberg) -- Bondholders of Italian lender Banca Monte dei Paschi di Siena SpA are enduring a fresh bout of volatility after talks to sell the bank to UniCredit SpA fell through over the weekend.

Notes of Monte Paschi hit the lowest since March 2020 before paring some of the losses, according to prices compiled by Bloomberg. A 750 million-euro ($872 million) subordinated bond, maturing in 2028, tumbled as much as 12.5 cents on the euro on Monday.

The moves reflect new uncertainty as investors try to anticipate what the failure of talks with UniCredit may mean for the notes, which have long been among the most volatile of any European bank bonds. Italy will now seek an extension to the year-end deadline for divesting the lender, which was nationalized in 2017.

“The headlines and volatility make these bonds impossible to trade, let alone own,” said Filippo Alloatti, head of financials credit at Federated Hermes.

Italy’s government is considering a recapitalization of Monte Paschi, offering the same conditions of the UniCredit deal. That could pave the way to new investors, but leaves subordinated bondholders concerned they may need to take losses in order to help plug a capital hole.

Judging by the price reaction “it seems people think burden sharing is a possible scenario,” Alloatti said. “One of my own reservations over bailing in the Tier 2s is that it’s the equivalent of pushing a big elephant into a mini cooper.”

Assuming a capital shortfall of 3 billion euros, “a potential bail-in of subordinated notes would cover about half the amount, but could only happen via a resolution of the bank,” said Francesco Castelli, portfolio manager at Banor Capital Limited.