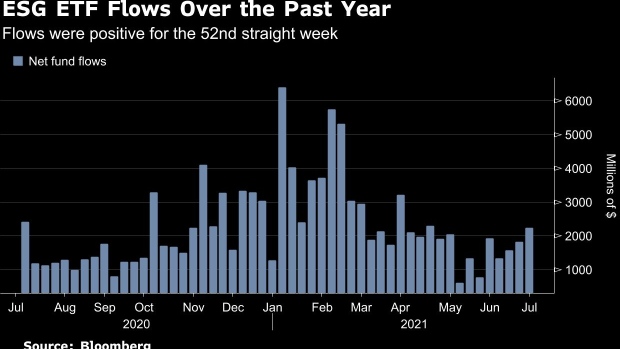 (Bloomberg) -- As trillions of dollars flow into ESG strategies, global investors are becoming frustrated with the hodge-podge of standards and ratings designed to guide their allocation decisions and are clamoring for more uniform rules.

Dimensional Fund Advisors, the U.S. giant with about $637 billion under management, is telling clients to take ESG ratings with a grain of salt, treating them like buy or sell ratings on a stock. Investors are better off working out their sustainability priorities and picking through raw data instead of relying on the myriad of ratings that have sprung up.

“We generally don’t advocate taking a ‘kitchen sink’ approach,” Joseph Chi, head of responsible investment at Austin, Texas-based Dimensional, said in an emailed reply to questions. Investors “should be aware that the more ESG issues they seek to address, the more challenging it will be to obtain both the desired investment outcome as well as the ESG result they’re seeking.”

Dimensional joins a growing chorus of money managers seeking fewer, more uniform rules and standards for investments tied to environmental, social and governance issues. The subjectivity and complexity of opaque ratings can work against sustainability objectives, according to Dimensional. Companies that do well on one ESG criteria may not necessarily do well on others. The more sectors are excluded, the more diversification is sacrificed, Chi said.

The need for simplified rules is becoming increasingly acute as more money flows into the space. About $68 billion has gone into ESG exchange-traded funds alone this year, and $118 billion over the past 12 months, according to data compiled by Bloomberg. As of the end of the first quarter, close to $2 trillion was invested in more than 4,500 sustainable funds globally, according to Dimensional.

Interpreting ESG reporting is posing a challenge for investors trying to wade through a patchwork of regulatory regimes. Each region is pursuing its own path, from the U.S. Securities and Exchange Commission to Europe’s new Sustainable Finance Disclosure Regulation.

The world’s top financial regulators pushed for unified standards with a new report this week. The Financial Stability Board published a roadmap for tackling some of the key challenges in identifying and managing climate risk, notably the availability of data on emissions by companies and adapting to scenarios for how the environmental shift could play out.

Asia has been slower off the mark but is fast gaining ground, said Emma Pringle, head of ESG at Sydney-based investor Maple-Brown Abbott Ltd. More companies in the region are producing ESG reports as regulators and stock exchanges in countries including India, Indonesia, and Japan introduce sustainability reporting guidelines, Pringle said. She expects to see increasingly standardized disclosures as the practice becomes the norm.

The new standards are creating more paperwork for investors. Sustainability reports can run to 100 pages and differ from company to company, with most major ESG ratings seeking to track 20 or 30 issues while measuring hundreds of indicators, according to Dimensional.

Rating providers may look at hundreds of reported and estimated variables for a single company and boil them down to an overall ESG rating. A plethora of companies offer ESG data and scores, including Bloomberg.

For some investors, too much information makes the data hard to navigate. It’s difficult to get comprehensive corporate responses on single ESG factors because of the myriad of nuanced questions put to companies that hampers their ability to respond.

“You’ve got multiple questions on E, then multiple on S and multiple on G, and there’s nuances around some of them,” said Sydney-based Sarah Shaw at 4D Infrastructure, part of BFM Group, which has about A$17.8 billion ($13.5 billion) under management. “The number of questions has evolved to a level that is really quite onerous.”

Shaw would like to see the process reduced to a more “concise” set of broad-based metrics and simpler questions, and would prefer some sort of global standard.

“If there was a more standardized set of performance measurements or metrics that every company had to at least measure against we’d have something as a starting point,” Shaw said.

There are some 30 ESG data providers around the world, but less than a handful have global coverage, KPMG said in a report in October. “As there is no single, accepted methodology for calculating ESG ratings, various ratings agencies often have wildly different assessments of the same company, which can prove frustrating,” KPMG noted.

As the rules evolve, standards from a few years ago -- such as those around carbon disclosure -- have lost their relevance as companies increasingly start to report under the Task Force on Climate-related Financial Disclosures, the global framework for climate reporting, said Pringle, whose firm oversees A$11 billion.

“The challenge becomes how to take all that data and turn it into something outcome oriented,” she said.