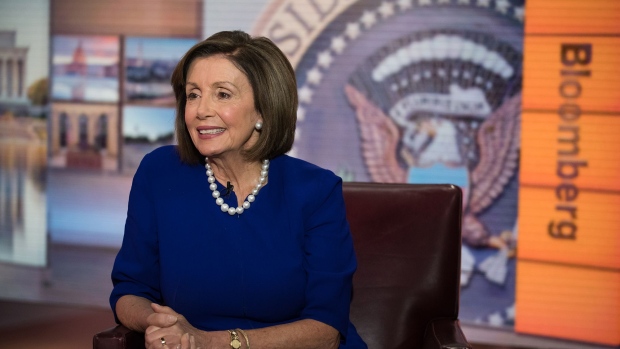 (Bloomberg) -- House Speaker Nancy Pelosi said Friday that she thinks a deal with President Donald Trump to lower the cost of prescription drugs is possible even as her chamber proceeds with an impeachment inquiry against him.

Enactment of a major bill could be a boon to consumers and put downward pressure on pharmaceutical company stock prices. Negotiations on a drug price bill continue with the White House, she said, noting that Trump hasn’t threatened to veto her proposal.

“We are in communication with them,” the speaker said in a roundtable Friday with Bloomberg reporters and editors in New York. “It’s all in negotiation.”

Pelosi said, however, that she hasn’t spoken with Trump since they argued over Syria policy during an Oct. 16 Cabinet Room meeting. He insulted Pelosi and she walked out, accusing him later of having had a “meltdown.”

The speaker said Democrats’ prescription drug bill was crafted with a bipartisan compromise in mind, seeking to limit what Medicare will pay and then to pressure drug companies to apply lower prices to the commercial market.

The Democratic bill “isn’t everything that the left want,” she said. “I told them we could go your route and we can be in court for the next 20 years, or we can have a bill that really gets results for the American people.”

Some progressives have proposed setting hard market price caps for drug prices offered to private insurance, which could be more vulnerable to a court challenge.

Pelosi’s staff has been negotiating behind the scenes with the White House on drug prices for most of this year. Trump said last week, after the death of Representative Elijah Cummings, for whom the House drug-price bill is named, that he still sees a possible deal.

The House plans to vote in mid-November on Pelosi’s bill, H.R. 3. It would allow Medicare to negotiate prices on the most expensive drugs and let the government use the threat of a tax on profits to pressure drug companies to offer lower prices to consumers using private insurance.

Cummings, the former chairman of the Oversight and Reform Committee, was a champion of lower drug prices, and the legislation named in his honor largely targets medicines that cost the government the most.

Ten medications accounted for almost 17% of the Medicare drug benefit’s $151 billion in 2017 expenditures, according to agency data.

The nonpartisan Congressional Budget Office estimates Pelosi’s bill would save the government $345 billion from 2023 to 2029, money that Democrats plan to use to expand Medicare benefits.

The Senate Finance Committee has produced its own drug price bill, which would not allow Medicare to negotiate drug prices. Instead, it would force pharmaceutical companies to pay a rebate to Medicare when drug prices increase faster than the rate of inflation. To become law, the Pelosi measure would have to be reconciled with any bill passed by the Senate before being sent to Trump for his signature.

In recent weeks, House Democratic leaders, seeking to find common ground with Senate Republicans and the White House, have resisted attempts by progressive Democrats to expand the list of drugs open to Medicare negotiation.

To contact the reporters on this story: Erik Wasson in Washington at ewasson@bloomberg.net;Alexander Ruoff in Arlington at aruoff2@bloomberg.net