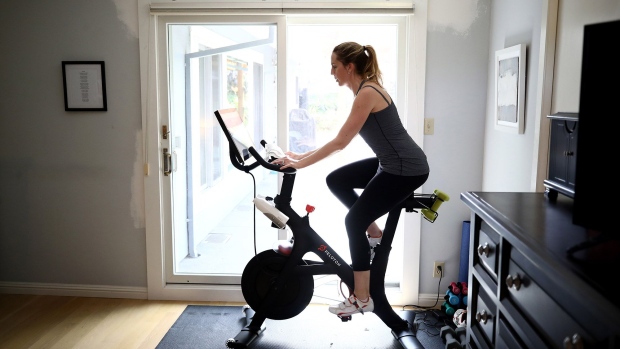 SAN ANSELMO, CALIFORNIA - APRIL 07: Jen Van Santvoord rides her Peloton exercise bike at her home on April 07, 2020 in San Anselmo, California. More people are turning to Peloton due shelter-in-place orders because of the coronavirus (COVID-19). The Peloton stock has continued to rise over recent weeks even as most of the stock market has plummeted. Peloton announced yesterday that they will temporarily pause all live classes until the end of April because an employee tested positive for COVID-19. (Photo by Ezra Shaw/Getty Images) Photographer: Ezra Shaw/Getty Images North America , Photographer: Ezra Shaw/Getty Images North America

Earlier this week, Echelon Fitness unveiled an “Ex-Prime” bike for US$500 that it said was developed in collaboration with Amazon. That was significantly less than Peloton’s machines that cost well over US$1,000. The news pushed Peloton shares down as much as 6.7 per cent early Tuesday before rebounding to close with a decline of less than 1 per cent.

Later Tuesday, Amazon denied they were in a partnership and told Echelon Fitness to stop selling the bike.

“This bike is not an Amazon product or related to Amazon Prime,” an Amazon spokeswoman said in a statement. “Echelon does not have a formal partnership with Amazon. We are working with Echelon to clarify this in its communications, stop the sale of the product, and change the product branding.”

Echelon Fitness blamed the incident on a “miscommunication.”

”This product was built by Echelon to sell exclusively on Amazon,” an Echelon Fitness spokesperson said. “We are working to rebrand the product to get it back up for sale as soon as possible.”

In an interview on Fox Business, Echelon Fitness Chief Executive Officer Lou Lentine said the company began “working with Amazon in early January. It just was a miscommunication with the internal team. We are working on a new name for the bike.”

Amazon has earned a reputation for shaking up established markets from books to consumer electronics. When investors sense the company entering a new sector, they often react quickly.