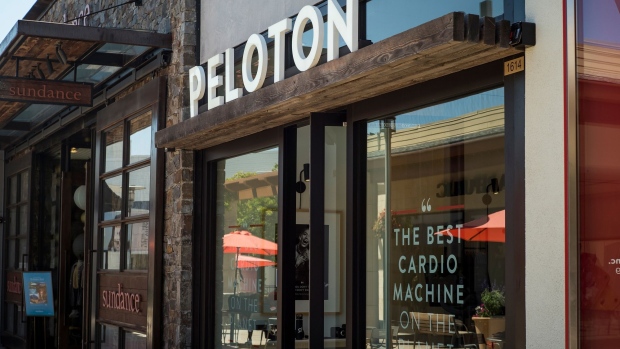 A Peloton Interactive Inc. store stands in Corte Madera, California, U.S., on Thursday, Aug. 29, 2019. Founded in 2012, Peloton describes itself as the "largest interactive fitness platform in the world" with more than 1.4 million members, according to its filing. , Bloomberg

Amazon.com Inc. told Echelon Fitness to stop selling an exercise bike that was promoted and branded as a product developed in partnership with the e-commerce giant.

Echelon announced the EX-Prime Smart Connect Bike earlier this week and said it was developed “in collaboration with Amazon.” The machine was listed on Amazon’s website for US$500, a steep discount to machines offered by Peloton Interactive Inc.

“This bike is not an Amazon product or related to Amazon Prime,” an Amazon spokeswoman wrote in an email late Tuesday. “Echelon does not have a formal partnership with Amazon. We are working with Echelon to clarify this in its communications, stop the sale of the product, and change the product branding.”

Amazon’s Prime subscription, which offers free shipping and other perks for an annual fee, has been one of the most successful offerings in e-commerce history. Products associated with the program often get a sales boost, especially on Amazon’s website.

Echelon didn’t immediately respond to a request for comment. However, the company’s original press release announcing the bike was no longer available online late Tuesday. On Amazon’s website, the product was also listed as “currently unavailable.”

Shares of Peloton fell as much as 6.7 per cent early Tuesday on concern about new competition from Amazon. But the stock recovered to be down less than one per cent at the close in New York.

“Other than a few cosmetic changes, the $500 bike is almost identical to Echelon’s $500 bike at Walmart.com, which has been available at Walmart.com since March and hasn’t had any noticeable impact to Peloton’s growth,” KeyBanc Capital Markets analyst Edward Yruma wrote in a note to investors.