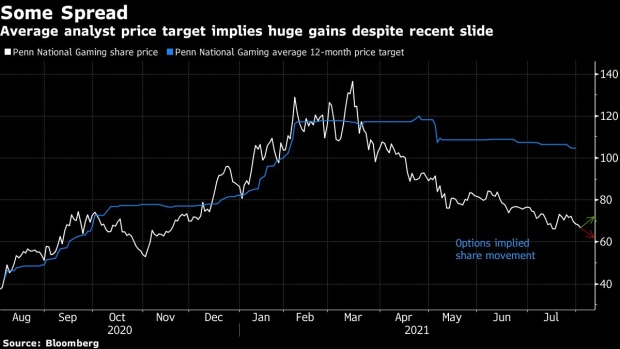 (Bloomberg) -- The options market is betting that Penn National Gaming Inc.’s earnings report will move the beleaguered gambling company’s stock Thursday -- one way or the other.

Options bets for the $10.4 billion company show expectations for a 7% move after the anticipated pre-market release, continuing the volatile earnings-day trading the casino operator has seen since it took a stake in Barstool Sports in January 2020. A downside move of that magnitude -- should the update disappoint --- would push the stock to its lowest since November and bring its loss since March to around 55%.

The gaming company’s stock has fizzled over recent months amid a dearth of sporting events and as the company struggled to gain market share for its mobile gambling offerings in closely watched states like Pennsylvania and Michigan.

Yet the stock’s high multiple shows investors still believe the company will be successful in mobile betting, which is something that hasn’t been seen so far, said Loop Capital Markets analyst Daniel Adam, who is one of just two who have a sell rating on Penn. The stock is currently trading at 120 times earnings, more than four-times the multiple of the S&P 500 Index, according to data compiled by Bloomberg.

“The rhetoric had been that Penn could leverage the powerful Barstool Sports brand and not have to spend as much as other players to gain traction,” Adam said. “But the reality has been that they’ve been unsuccessful in maintaining a top three share position, which is a goal.”

Other Wall Street analysts have continued to be bullish on the Wyomissing, Pennsylvania-based company. The difference between the average 12-month price target of $105 and Tuesday’s closing price of $66.69 is near the largest for the company in its more than two-decade existence.

Thursday’s earnings will give a deeper look into the company’s Barstool Sportsbook, showing how well its doing in expanding into the nascent sports-betting market. The stock soared more than 400% to a record in March from the January 2020 news of its stake, as analysts cheered the mobile gambling offering.

While Penn reported preliminary second-quarter revenue that topped the average analyst estimate in June, the stock fell as earnings before interest, taxes, deductions and amortization missed expectations. Some analysts warned that the strong quarterly revenue was anticipated, fueled by pent-up demand from gamblers flocking to Penn’s regional casinos after the lockdowns ended.

That said, the stock’s biggest bull, Needham analyst Bernie McTernan, argued in a June 24 note that the company can be more aggressive in drawing customers for the upcoming NFL season to bolster its share of the mobile sports-betting market.

Any commentary from management in the quarterly results or on the earnings call regarding plans for the upcoming professional and college football seasons will be closely watched by Wall Street.