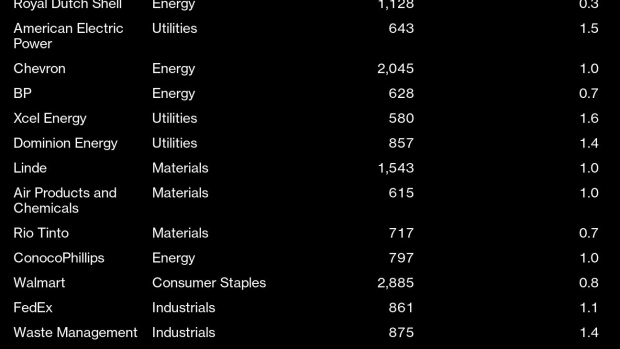 A wildfire burns on Highway 63 south of Fort McMurray, Alberta, Canada, on Saturday, May 7, 2016. Wildfires raging through Alberta have spread to the main oil-sands facilities north of Fort McMurray, knocking out an estimated 1 million barrels of production from Canada's energy hub. Fire officials say the out-of-control inferno may keep burning for months without significant rainfall. Photographer: Bloomberg/Bloomberg , Bloomberg via Getty Images

(Bloomberg) -- Sign up to receive the Bloomberg Green newsletter in your inbox every weekday.

The 10 largest U.S. public pension funds still have a lot of money invested in the biggest corporate polluters.

Analysts at Bloomberg Intelligence put the figure at about $40 billion, meaning 9% of the funds’ combined equity holdings are devoted to 20 high-carbon emitting companies. The numbers may be lower since California and New York funds pared their stakes in companies including Exxon Mobil Corp., Walmart Inc. and Southern Co. since the start of the year.

Nevertheless, the fact that giant retirement plans are devoting so much money to a part of the market most responsible for accelerating the climate crisis might be surprising to those who believe recent messaging from those funds.

Among the most outspoken has been the New York State Common Retirement Fund, the country’s third-largest public pension fund with assets of about $255 billion. State Comptroller Thomas DiNapoli pledged in December to reach net-zero greenhouse gas emissions across the fund’s investments by 2040, a decade before most other U.S. pension plans.

He also said the fund may sell its holdings in the riskiest oil and gas companies by 2025. A review of coal companies has already resulted in the fund’s divestment of 22 companies, the fund said.

And three months ago, the New York fund revealed that it stopped investing in oil sands companies, including Imperial Oil Ltd. and Husky Energy Inc., saying they haven’t prepared for the transition to a low-carbon economy. These companies are at the tip of the spear when it comes to the fossil-fuel industry’s role in global warming, producing a heavy type of oil with extraction methods that are significantly more carbon-intensive than other forms of crude production.

DiNapoli wrote in April in a climate-action progress report that the New York fund has earmarked $20 billion for sustainable investments and climate solutions over the next decade. He said the fund is redoubling its efforts to “encourage the companies in which we invest to accelerate their transition to a net-zero economy and to further allocate capital to net-zero aligned investments that meet our criteria.”

Those are a lot of green promises. As it stands, however, the New York fund still had $3.2 billion invested in fossil-fuel producers in its public equity and corporate fixed-income portfolios at the end of 2020. To be sure most of the equity holdings are tied to passively managed indexes, which complicates any decisions to unload oil and gas stocks.

And also, since the start of 2021, the fund has pared its holdings of Exxon Mobil, as well as Linde Plc, Waste Management Inc. and Union Pacific Corp., all members of BI’s list of the top 20 high-carbon emitting companies.

So why no divestment? The New York comptroller said in a statement that the fund’s preference is to get polluters “to address climate risks, set net-zero goals and successfully transition to a low-carbon future. Divestment is a last resort reserved for those companies” that aren’t making the transition, according to the fund.

In 2020, the New York fund filed three proposals requesting companies increase their use of renewable energy and improve energy efficiency at their facilities. All three companies—Texas Instruments Inc., Qorvo Inc. and Microchip Technology Inc.—agreed to do so, according to DiNapoli.

Additionally, the New York fund has said it held discussions with external asset managers about getting them to conform with the Task Force on Climate-related Financial Disclosures, which have become the market benchmark for reporting climate risks. So far, only about half of those asset managers have published or committed to producing climate reports tied to TCFD, according to the fund.

The California Public Employees’ Retirement System said it’s also pushing companies to improve their corporate disclosures in line with the final recommendations of TCFD. The largest U.S. public pension fund added that its engagement efforts are focused on high carbon emitters. Specifically, the fund is a founding member of Climate Action 100+, which is an investor-led initiative set up tp press the world’s biggest corporate greenhouse gas emitters to take necessary action.