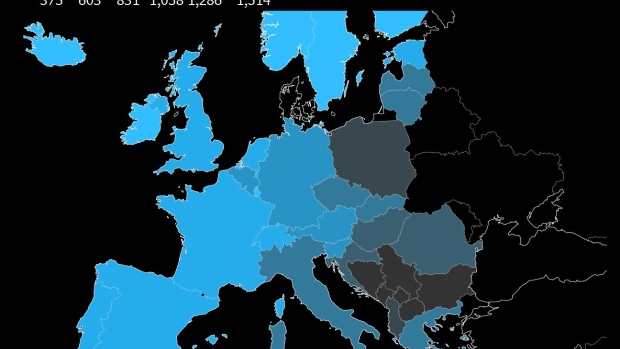 (Bloomberg) -- When Paulina Mroczkowska noticed a growing pile of garbage in the yard of a carpenter’s workshop across the street, the alarm bell rang. Her concern wasn’t over the hazards of uncollected waste, but how it was going to be used.

Poland is home to 40 of the 100 cities with the worst air quality in the European Union because of a reliance on coal to heat homes, a legacy of the communist era that championed mining. But now a shortage of the fuel and the soaring cost of living are spurring people to burn alternatives — including household refuse.

“It’s so bad this season that you can smell trash burning every day, which is completely new,”  said Mroczkowska, 35, a mother of three from Jablonna on the northern outskirts of Warsaw. “Rarely can you smell a regular fuel. It’s scary to think what happens when it really gets cold.”

As Russia’s war in Ukraine exposes the fragility of Europe’s energy security, Poland has another layer of risk: that efforts to tackle pollution go backwards in a country with among the continent’s highest prevalence of premature deaths linked to contaminated air.

The government, which has temporarily suspended quality controls for coal, is considering handing out protective masks as the temperature drops. Last month, Law & Justice leader Jaroslaw Kaczynski, the country’s most powerful politician, suggested people do whatever it takes to keep warm. He told supporters at a rally in Nowy Targ, southern Poland, that “one needs to burn almost everything, except for tires and similarly harmful things.”

Some municipalities have been relaxing environmental restrictions introduced in recent years. The Malopolska regional assembly in Krakow, which is controlled by the ruling Law & Justice Party, last month voted to delay a ban on furnaces, allowing the burning of anything from coal to trash until early 2024. Before the pandemic, Krakow police started deploying drones with cameras to check chimneys from above for signs that household furnaces were illegally burning trash.

Poland’s experience with smog isn’t on the same scale as parts of the Balkans such as Bosnia-Herzegovina. But Poland’s use of the coal makes it an outlier among the 27-member EU even as it promises to stop using the fuel for electricity generation by 2050. The country of 38 million people accounts for 77% of all the households in the EU that still use coal for heating.

Despite President Andrzej Duda’s assurances that Poland has enough coal to last for 200 years, the nation has grown dangerously hooked on supplies from Russia. When the government moved in April to ban Russian coal, it led to long lines of trucks in front of mines.

Surveys show 60% of households don’t have enough coal supplies to last through the winter, according to Piotr Siergiej, spokesman for a network of environmental activists called Polski Alarm Smogowy — or Polish Smog Alert. “People are scared and they are collecting anything that can be used for burning,” he said.

That includes lignite, wood, peat, oats — and garbage.  Nowy Sacz, about 100 kilometers (62 miles) southeast of Krakow, is facing an “unprecedented” situation where the city is now collecting less garbage than in the same period of last year, according to Mayor Ludomir Handzel. That’s in a place that was ranked last year as the most polluted among 334 towns and cities tracked by European Environmental Agency.

“We’re seeing a significant drop in garbage collection, especially when it comes to materials than could at least in theory be suitable for burning such as paper, cardboard and packaging,” Handzel told TVN24 news channel. “We’ll fine those who are trying to poison us and our children.”

The industry group representing waste management companies said it’s too early to draw conclusions from the decline in garbage quantities. It could be because of a drop in consumption rather than to use for illegal burning, it said by email.

Poland has recorded about 40,000 premature deaths linked to air pollution annually in recent years, the most in the EU per capita after Bulgaria. Kamil Sukiennik, who is also active with Polski Alarm Smogowy and lives in Nowy Dwor outside Warsaw, said the smog in his neighborhood comes from people firing up their furnaces in the evening. The acrid smell can already be felt now, in early fall when the mercury has yet to plunge.

“Through their comments the government and Kaczynski have effectively declared war on me and the entire community, which is trying to care for the clean air,” Sukiennik said. “We’re not going to tolerate this.”

Some families aren’t waiting for the government to act. This year, Brimmu, a Warsaw-based startup, began marketing a cover for baby strollers with an inbuilt air filtration system and demand for them is rising.

Katarzyna Mardeusz-Karpinski decided to set up the company with her husband in Warsaw five years ago when their son was born and they couldn’t take him out for a walk after an alert about poor air quality.

“We are seeing a lot of interest from parents who are worried about smog this winter and they want to protect their newborns,” she said. “There was some light at the end of the tunnel until recently and we could hope the air quality is improving. But everything now suggests it could really get worse.”