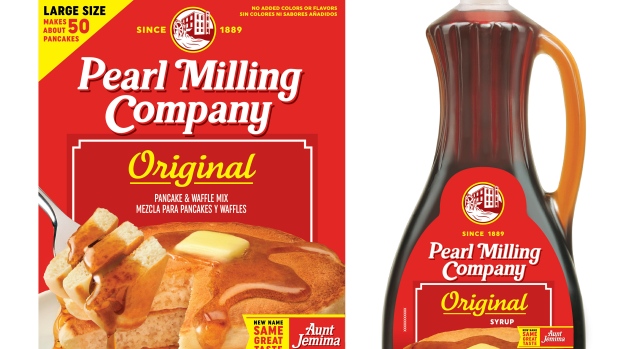 PepsiCo Inc. rebranded its Aunt Jemima pancake-and-syrup line as Pearl Milling Co., following through on a pledge to eliminate a brand linked to racial stereotypes.

Products with the new name, including pancake mixes, syrups, cornmeal and other goods, will begin appearing on shelves in June, the snack-and-beverage giant said in a statement Tuesday. It will continue to use the Aunt Jemima name -- but not the character image -- until then.

The company agreed to phase out Aunt Jemima last year, acknowledging that the 131-year-old brand was rooted in racist tropes. The new name has historical ties to the existing product line: Pearl Milling Co., founded in 1888, created the self-rising pancake mix that was later branded as Aunt Jemima.

When PepsiCo first announced plans to change the brand in June, it also pledged a US$5 million commitment to support the Black community. The move to rebrand was part of a broader push by consumer-product companies to eliminate images and names deemed offensive, a response to nationwide protests against systematic racism.

In making the transition, the company’s Quaker Oats division “worked with consumers, employees, external cultural and subject-matter experts and diverse agency partners to gather broad perspectives and ensure the new brand was developed with inclusivity in mind,” according to the statement.