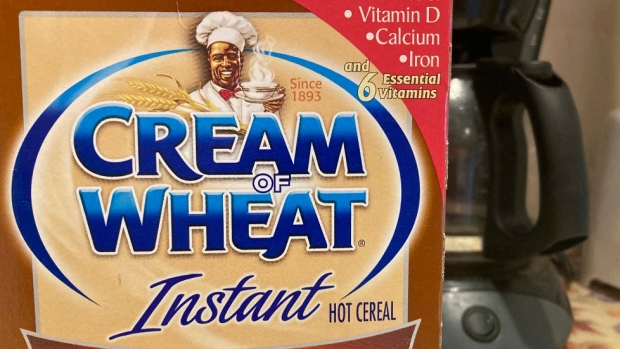 A box of Cream of Wheat is displayed on a counter, Thursday, June 18, 2020 in White Plains, N.Y. Cream of Wheat and Mrs. Butterworth are the latest brands reckoning with racially charged logos. B&G Foods Inc., which makes Cream of Wheat hot cereal, said it is initiating “an immediate review” of its packaging. A smiling black chef holding a bowl of cereal has appeared on Cream of Wheat packaging and in ads since at least 1918, according to the company's web site. , AP Photo/Donald King

B&G Foods Inc. will remove an image of a Black chef from all of its Cream of Wheat packaging, the latest move as consumer companies grapple with legacy logos with racist connotations.

“While research indicates the image may be based upon an actual Chicago chef named Frank White, it reminds some consumers of earlier depictions they find offensive,” the food manufacturer said in an emailed statement. “Therefore, we are removing the chef image from all Cream of Wheat packaging.”

The move comes one day after Mars Inc. announced plans to change the name of its Uncle Ben’s rice to Ben’s Original and drop the image of a Black man from its packaging.

Companies across the globe have been reviewing their products and imagery in response to calls for justice and racial equality. PepsiCo Inc. said in June it will change the name of its Aunt Jemima pancake mix, acknowledging that the brand is rooted in racist tropes. Around the same time, Conagra Brands Inc. announced a “complete brand and packaging review” for its Mrs. Butterworth’s syrup, whose “packaging may be interpreted in a way that is wholly inconsistent with our values,” it said at the time.