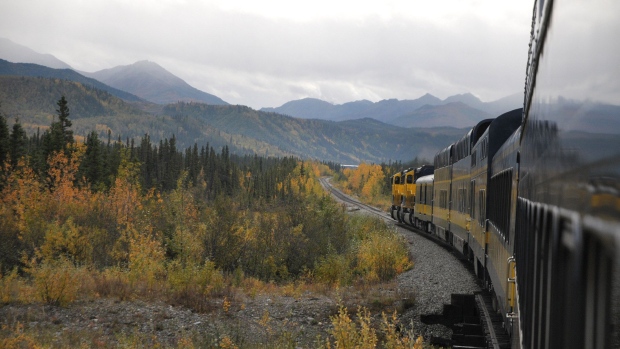 The team behind the proposed Alaska to Alberta railway aims to start prep work for construction in December, with a goal of getting the US$17 billion cross-border railroad running by 2025.

Sean McCoshen, founder and chairman of the company behind the project, said he has spent US$100 million on studies and engineering reports and now has private funds backing the Alaska to Alberta Railway Development Corp., or A2A Rail, to start construction. The railway will connect Fort McMurray, in the heart of Alberta’s oil sands, with the Alaska Railroad southeast of Fairbanks.

“This project is extremely viable,” McCoshen, 53, said in an interview that also included A2A Rail’s finance and strategy head Robert Dove, who previously led the Carlyle Group’s infrastructure fund. “It’s a win-win for all concerned.”

The railway would extend U.S. access to Alberta’s landlocked energy resources and offer oil-and-gas producers an alternative transportation corridor at a time when pipeline projects linking the isolated area to the west coast have been delayed. The 1,600-mile (2,750-kilometer) connection that cuts across the Yukon could also fuel economic growth in the region, benefiting both Canada and the U.S.

“This rail link will be the anchor tenant of a major northern development corridor,” Calgary-based A2A said Tuesday in a statement after getting a presidential permit for the project, adding that it will serve to facilitate economic development, and provide service to rural households and other opportunities to communities in this isolated region.

The railway would create jobs and improve living standards throughout the area, and the project wouldn’t solely be focused on shipping bitumen from Alberta’s oil sands, according to McCoshen and Dove. A2A Rail plans to move general cargo, consumer goods and fuel into the geographically isolated region.

“You’ve got vast quantities of people living up north well below the poverty line,” McCoshen said. “I’m shocked that this hasn’t been done already.”

U.S. President Donald Trump granted a presidential permit on Sept. 28, two days after tweeting that he planned to green-light the cross-border project.

Based on the strong recommendation of @SenDanSullivan and @repdonyoung of the Great State of Alaska, it is my honor to inform you that I will be issuing a Presidential Permit for the A2A Cross-Border Rail between Alaska & Canada. Congratulations to the people of Alaska & Canada!

“We know we have tremendous support from all political parties in the United States” along with parties in Alaska, local governments in Alberta, Northwest Territories and Yukon, McCoshen said.

A2A Rail said it still needs environmental approvals in Canada and the U.S. as well as other permits and approvals from various government levels in both countries.

McCoshen, a former private banker and lawyer, is also chief executive officer of the McCoshen Group, which owns or holds significant interests in 11 companies ranging from manufacturing to finance, a company spokesperson said. The group has an asset base of C$3.95 billion (US$2.97 billion), said the spokesperson. McCoshen owns 100 per cent of the Alaska to Alberta Railway project, though he’s prepared to sell a minority stake to indigenous groups in Alaska and Canada.

The project is estimated to provide an additional C$60 billion (US$45 billion) in cumulative economic output through 2040, with the creation of more than 28,000 jobs, A2A said in the statement.