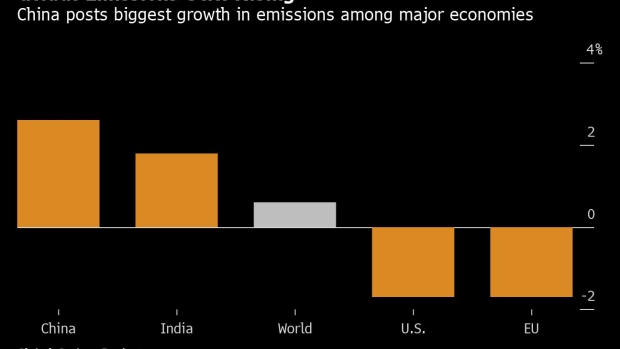 (Bloomberg) -- While global carbon emissions growth is slowing, the persistent rise is a warning that governments aren’t doing enough to stave off the worst consequences of climate change, according to a new report.

Carbon-dioxide emissions from burning fossil fuels likely increased by 0.6% this year, down from 2.1% in 2018, according to a report from the Australia-based Global Carbon Project. Declines in the U.S. and Europe were offset by increases in the fast-growing economies of China and India, it said.

“Current climate and energy policies are not enough to reverse the trends in global emissions,” the report’s authors said in a press release. “Continued support for low-carbon technologies need to be combined with policies directed at phasing out the use of fossil fuels.”

The warning comes as envoys from nearly 200 countries gather this week for United Nations-organized climate talks, aimed at implementing the 2015 Paris Agreement to limit fossil fuel pollution, and as a global protest movement calling for tougher action on climate change gathers momentum.

But increasingly dire estimates about the pace of climate change are leading to calls for more extreme solutions than the actions that nations have already committed to.

“Every single additional year of emissions growth makes it significantly harder to achieve the goals of the Paris Agreement,” Pep Canadell, GCP’s executive director, said in a briefing before the release of the report.

Rising natural gas use was the most-important driver of emissions growth in 2019, Canadell said, raising questions over the industry’s claim that the fuel serves as a bridge between dirtier coal and cleaner renewables.

“It may be a bridge, but a bridge that is not going to lead us into the Paris Agreement targets,” Canadell said.

The slowdown in global emissions growth was significant, Canadell said. Given the margin of error in the projection, an actual decline could not be ruled out, he added.

Coal use accounted for 42% of global emissions from fossil fuels, but its importance in power generation is on the wane. In the U.S., an abundant supply of cheap natural gas is helping accelerate the transition away from the dirtiest fuel.

China’s emissions growth is projected at 2.6% this year, similar to the pace in 2017 and 2018. India’s increase is expected to ease to around 1.8% from 8% last year, due to an economic slowdown and a particularly wet monsoon season, which saw strong hydropower generation displace some coal-fired generation.

“The failure to mitigate global emissions, despite positive progress on so many aspects of climate policy, suggests that the full bag of policy options is not being effectively deployed,” the report said.