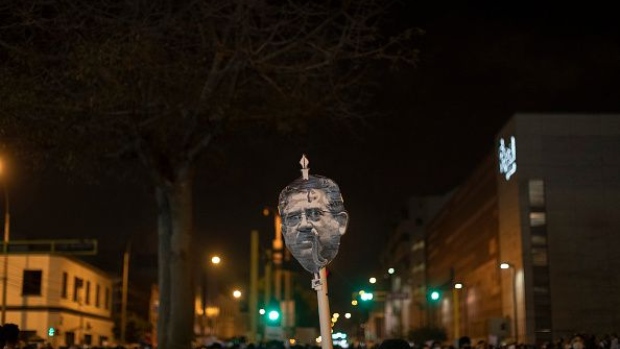 (Bloomberg Opinion) -- Early last year, Peru looked as if it had turned a corner. Thrust into office when political scandal toppled the president in 2018, stand-in leader Martin Vizcarra responded with straight talk and a sweeping reform agenda — and promptly soared in the polls. Yes, politics was messy, but the economy remained remarkably unscathed and investment grade. Fitch Ratings saw blue skies ahead.

It might have been a fever dream. Twenty-two months on, the country of 33 million people has been devastated by coronavirus, with one of the world’s highest disease mortality rates, a projected 13.9% drop in gross domestic product, spiking debt and a fiscal sinkhole. Despite massive emergency stimulus, poverty could reach 30% this year. As if that were not destabilizing enough, on Nov. 9, congress voted Vizcarra out of office, sending thousands of protestors to the streets. On Sunday, as fury turned to violence, the interim president who schemed for Vizcarra’s ouster also resigned, leaving Peru without a president for a day. Late Monday, congressman Francisco Sagasti finally drew the short straw.

It’s tempting to write off Peru’s woes as a homemade affliction. But behind Peru’s troubles is a larger regional tale of polarization, government gridlock and hyper-fragmented legislatures with sharp appetites and loose loyalties.

In some countries legacy parties are practiced at holding executives to ransom; in others, feeble parties become clay in the hands of caudillos. The result, too often, is a relentless assault on democratic civility and institutional stability, played out in a web of intrigue that would make the scheming parliamentarians in the Danish political drama Borgen look like puckish amateurs.

Peru’s crisis traces to the small-bore ambitions of the unicameral parliament, which is splintered into nine parties, none of which garnered more than 11% of the popular vote. They owe their seats to Vizcarra, who after clashing repeatedly with obstructionist lawmakers last year dissolved congress in September and called new elections. Seated in January, the new parliament promptly turned on him, just as the streets then turned on his newly throned successor

Vizcarra’s impeachment solves nothing. The country’s 24 registered parties have launched 34 presidential candidates for the 2021 elections. “Whoever wins, no one will have a congressional majority,” said Peruvian political analyst Carlos Melendez, who teaches at Diego Portales University in Santiago, Chile. “The only logic in parliament will be confrontation. In such a highly polarized times, consensus doesn’t work.”

Authoritarians are among the rare winners amid such turmoil. Part of the reason why Venezuelan autocrat Nicolas Maduro has survived social convulsion and a shambolic economy is the country’s fractious political opposition, a mishmash of discontents split among 27 parties.

Bad actors also rise. Corruption has flourished in Guatemala thanks largely to the panoply of parties that fly flags of convenience at every election and draw half their finance from illicit sources.

Latin America’s highly fragmented political systems are the product of historical whiplash, as political idealists in the 1980s and 1990s dismantled the strictures of dictatorship by rehabilitating parties outlawed by autocrats and allowing new ones to emerge. The official indulgence produced a tongue-twisting collection of partisan acronyms and, for some countries, a permanent stress test for governability. After a long bout of authoritarian rule, Peruvian democracy fractured into small parties dominated by regional bosses and special interests. Chile succeeded in replacing the belljar politics of General Augusto Pinochet (1973-1990) with the Concertacion, a remarkably stable democratic pact uniting 17 parties – at least until recently, when Chileans have grown impatient with that clubby deal, as well.

Yet attempts to reform the freewheeling system by limiting the number of parties were likened to blighting democracy itself: “It’s like a gardener who prevents new flowers from blossoming,” one Brazilian politician famously protested. No wonder Brazil – 33 official parties, 24 of them with seats in congress, and 556,000 candidates in Sunday’s municipal elections – became the marquee for extravagant democracy.

This arrangement is one that only a political scientist could love. The need for executives to negotiate with multiple parties is not all bad and can sometimes forge consensus out of cacophony. “Democracy in fragmented party systems depends on the president’s ability,” said Anibal Perez-Linan, a scholar of democracy at Notre Dame University. “If polarization is controlled within certain boundaries, it can lead to stable governing coalitions. If it gets out of hand, democratic stability is degraded. “

Former Brazilian President Fernando Henrique Cardoso rode a three-party coalition to office in 1994 and managed to pass some two dozen constitutional reforms by legislative supermajorities. Those were the days. Twenty years later, when Dilma Rousseff ran for reelection, she had to answer to 10 parties, each of which took its cut and eventually deserted her. “It’s absolutely difficult for all presidents, not just me, but all who will follow, to achieve governability when this country has 35 parties,” she said clamoring for political reform on the verge of impeachment in 2016.

Happily for Brazil’s political aspirants, the rules of engagement are changing. A new electoral law will bar parties that fail to reach a minimum threshold of votes (1.5% of the tally in 9 states, and 1% nationwide) from drawing public electoral funds in future elections. Two of every three existing parties are likely to disappear over the decade, Brazilian political analyst Sergio Abranches told me.

Meanwhile, however, sitting presidents must capture, cajole and nourish ever larger coalitions just to govern. President Jair Bolsonaro has taken note. The self-groomed right-wing disruptor rose to the national stage standing up against politics as usual, but has since bent the knee to build a presidential coalition of dubious allegiance and minimal expectations. Bolsonaro has enough congressional allies to avoid impeachment but not much else.

Bolsonaro’s slog, like Vizcarra’s fall, and the angst of unloved national leaders from Chile to Colombia, suggests that while playing to the crowd may do wonders for social media cachet, it is no way to govern much less thrive in a Darwinian democracy. “Politicians need to be skilled managers of complex coalitions,” said Mejia-Acosta. Until the party population thins, they can ignore the Babel only at their, and their nations’, risk.

Mac Margolis is a Bloomberg Opinion columnist covering Latin and South America. He was a reporter for Newsweek and is the author of “The Last New World: The Conquest of the Amazon Frontier.”