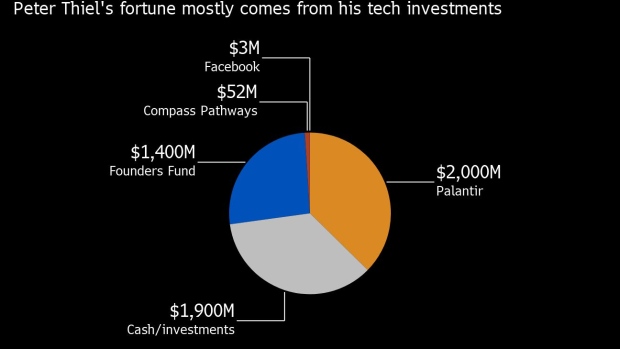 (Bloomberg) -- “Competition is for losers.”

That’s Peter Thiel talking, again and again, about his big rule for success.

It means go where other people haven’t yet, something he famously did in the 1990s by co-founding PayPal Holdings Inc., and then even more famously, in the 2000s, by throwing $500,000 at a hoodied Harvard kid and something called TheFacebook.

His iconoclastic streak has made Thiel a rich man -- richer than ever, in fact, with his data-mining company, Palantir Technologies Inc., soaring on the stock market. Today he’s worth $5.3 billion, according to the Bloomberg Billionaires Index.

But if, after a point, money is just a way to keep score, even his latest coup with Palantir can’t disguise this fact: Peter Thiel may be one of the best investors in Silicon Valley, but his track record is decidedly mixed.

The same against-the-grain approach that has paid off so handsomely, with early bets on SpaceX, Spotify Technology SA and Airbnb Inc. has also backfired spectacularly from time to time. Next to that Harvard kid, Mark Zuckerberg, Thiel’s fortune is a pittance. Zuckerberg is worth $104.1 billion while Elon Musk, another techno-contrarian whose initial fortune was born from PayPal, has a net worth of $102.9 billion, up $75 billion this year alone.

Thiel didn’t respond to multiple emails and calls to a spokesperson requesting comment.

His biggest win, Facebook Inc., was also his biggest miss. He sold most of his stake in 2012 through a prearranged stock-trading plan at an average price of less than $20 a share. His foray into hedge funds ended in disaster after he misread the global economy and the markets.

Thiel founded Clarium Capital around the same time he sold out of PayPal. He started the hedge fund with $10 million, mostly his own money, and positioned it to profit off market swings caused by global events, placing bets in line with his contrarian worldview.

Clarium initially thrived as several of Thiel’s predictions bore out, particularly the rising cost of oil and the collapse of the U.S. housing market. At its peak in mid-2008, the fund managed $7.2 billion.

But in 2010 returns declined about 23%, its third-straight year of losses, as the economy recovered and oil slumped. Though some of his calls were broadly correct, his timing wasn’t. Clarium’s assets fell and Thiel ended up converting the fund into a private investment vehicle for primarily himself.

“His principal failure was wanting to be proven right intellectually,” said Simon Kerr, publisher of industry newsletter Hedge Fund Insight. “It was a bit of hubris. His macroeconomic framework and concept were correct, but how it was affected in markets wasn’t.”

A German-born lawyer by training, Thiel backed into a career as an investor, drawn by the opportunities to identify and solve problems. While a student at Stanford University, he latched on to the ideas of professor Rene Girard, a philosopher who claimed that humans form their desires based on what others want. In other words, by copying one another.

That premise has influenced his investment targets -- consider the user behavior on Facebook -- and shaped his heterodox thinking. He co-founded PayPal in the belief that people needed a form of payment that was convenient, secure and protected from government whims. But his professed libertarian leanings have at times clashed with his actions, such as his embrace of President Donald Trump in 2016 and his co-founding of Palantir, which relies on government contracts for much of its revenue.

The company’s “software is mission critical to various U.S. agencies,” Morningstar Inc. analyst Mark Cash wrote in a note Monday. Palantir posted its first earnings report as a public company on Thursday and said it expects sales growth to slow next year.

Thiel has also poured money into moonshot projects seemingly ripped from sci-fi films. He co-founded the Seasteading Institute, a nonprofit promoting the creation of man-made floating islands that are politically autonomous, and donated to a foundation focused on extending human lifespan “by making 90 the new 50,” according to its website. Confirming his pessimism about the world’s future, he bought property in New Zealand, a favorite among doomsday escapists.

He also got back into finance, putting $100 million into Mithril Capital, an investment firm founded by a former Clarium employee that generated more headlines for its legal woes than its returns.

Not all of his forays have been intended to make money. Yet even those that aren’t reflect a distinctly Thielian form of philanthropy, advocating nonconformist solutions for, as he sees it, an innovation-starved world stifled by politics and the misguided elite. His Thiel Foundation sponsors a fellowship that grants $100,000 to a student on the condition that they skip or drop out of college to “to build new things.”

He was revealed to be the backer of Hulk Hogan’s successful invasion of privacy lawsuit against website Gawker in 2016. The jury awarded Hogan $140 million, bankrupting both the site and its founder, Nick Denton.

Even his most successful investment is one he never fully realized. At the time of Facebook’s 2012 initial public offering, Thiel’s pre-offering stake was 2.5% and valued at $1.7 billion. That holding would today be worth $12.3 billion had Thiel, a board member, not sold more than a third of it in the IPO. He offloaded most of the remainder later that year.

Yet there’s little evidence that wealth in and of itself is the goal for Thiel.

“I think Peter is motivated genuinely by a certain curiosity, almost as if he’s moving pieces around on a chessboard,” said Ryan Holiday, author of “Conspiracy: Peter Thiel, Hulk Hogan, Gawker and the Anatomy of Intrigue.”

“You might not always agree with the moves, but it’s hard not to respect the boldness of the style.”