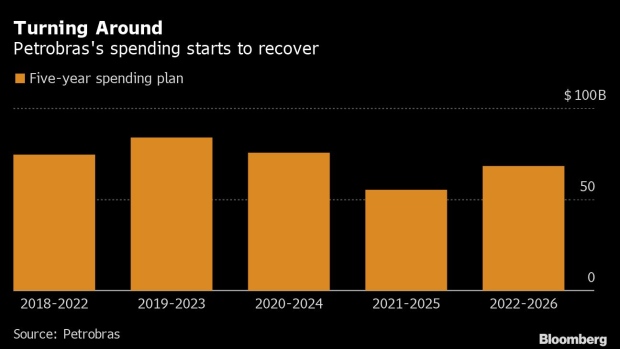 (Bloomberg) -- Brazil’s state-controlled oil company plans to continue selling off its least profitable oil fields in 2022 and stick to market-friendly policies even as the country heads into an election year, with candidates debating its independence.

Petrobras is focusing on selling legacy oil fields on shore and in shallow waters where costs per barrel are higher than in ultra-deep waters, Chief Financial Officer Rodrigo Araujo Alves said Tuesday in an interview on Bloomberg. The company also plans to continue selling off refineries, a process that has made the domestic fuel market more competitive.

“Upstream assets are not so affected” by the elections, Araujo. “We expect to deliver on signings and closings in 2022.”

Assets sales have been a key component of Petrobras’s success at debt reduction in recent years. The Rio de Janeiro-based producer has increased dividend payments after bringing total debt below $60 billion, and additional asset sales will help to guarantee dividend payments if oil prices decline.

Petrobras is also sticking to its policy of tracking international gasoline and diesel prices even though the company has come under pressure from Brazilian President Jair Bolsonaro and opposition politicians to keep prices in check.

“The company is independent,” said Araujo.

The recent drop in oil prices has temporarily removed the need for domestic fuel price increases. Araujo said the company expects Brent to average $72 a barrel next year.

The company’s commitment to market-based fuel prices is getting challenged on the campaign trail. Former president Luiz Inacio Lula da Silva, who currently leads opinion polls ahead of 2022 elections, has said he will reverse Petrobras fuel policy to keep prices in check. Petrobras lost tens of billions of dollars subsidizing gasoline and diesel when Brazil was governed by Lula’s Workers’ Party.

Last week Petrobras unveiled a 24% increase in it’s five-year business plan to $68 billion, bringing it closer to levels seen before the pandemic crashed the oil market in 2020. A windfall from higher prices, along with asset sales, is helping fund the development of giant fields in ultra-deep waters of the South Atlantic known as pre-salt reserves.