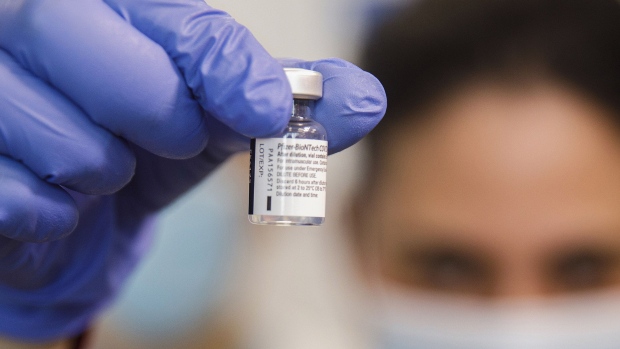 Pfizer Inc. and BioNTech SE’s Covid-19 vaccine won European approval, clearing the way for inoculations to start before the end of the year as the continent struggles with rising death rates and tighter lockdowns.

The European Commission granted market authorization to the vaccine, named Comirnaty, on Monday, compressing multiple steps of bureaucracy after a signoff from the European Medicines Agency earlier in the day.

“It is a significant step forward in our fight against this pandemic,” said Emer Cooke, executive director of the agency. “This is really a historic scientific achievement.”

EMA officials said there’s no evidence to suggest the vaccine won’t work against the new variant of the coronavirus that emerged in southeast England, leading to an emergency lockdown in London and causing countries including Canada, France and Germany to halt flights and suspend rail links.

Pfizer’s Covid vaccine is the first to gain clearance in the EU, a turning point in the battle against a virus that has ravaged the continent. Leaders in the bloc have been pushing the regulator to speed up its review amid complaints that residents of Europe were still waiting to get a vaccine -- pioneered in Germany -- that is already being used in the U.K. and U.S. The goal is to start a European immunization campaign on Dec. 27, commission President Ursula von der Leyen said last week.

Monday’s recommendation puts the EU in position to meet that timeline.

It’s a decisive moment in our efforts to deliver safe & effective vaccines to Europeans!

The @EMA_News just issued a positive scientific opinion on the #BioNTech / @pfizer vaccine.

Now we will act fast. I expect a @EU_Commission decision by this evening.

BioNTech rose 1.7 per cent in German trading. The stock has nearly tripled this year. Pfizer declined as much as 2 per cent in trading in the U.S. on Monday.

Just as Europe prepares to roll out the first vaccine, an effort is underway to contain the variant that the U.K. government said is spreading even more easily. Officials at the European regulator said they’re optimistic about the vaccine’s impact against the new strain.

”We will need to see this virus changing quite substantially before we can really be in a situation to say that trouble is coming up,” said Marco Cavaleri, chairman of the EMA’s pandemic taskforce.

The trials showed the vaccine was effective in preventing COVID-19 in people from 16 years of age, the agency said in a statement.

Unlike the U.S. and U.K., which conducted emergency authorizations, the EMA reviewed the vaccine for a conditional marketing authorization. Such a decision requires more evidence, the EU commission’s directorate-general for health said last week. The EMA committee is also reviewing a similar vaccine from Moderna Inc., with a key meeting set for Jan. 6.