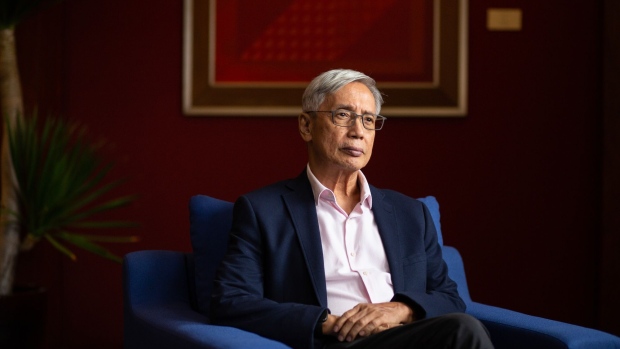 Felipe Medalla, governor of the Bangko Sentral ng Pilipinas (BSP), during an interview in Manila, the Philippines, on Tuesday, June 7, 2022. The Philippines will likely follow its interest-rate increase last month with at least two more hikes to curb inflation, according to the central bank’s incoming governor. , Bloomberg

(Bloomberg) -- The Philippine central bank’s series of interest-rate hikes have likely contained inflation, Governor Felipe Medalla said, as he signaled a more gradual tightening path for the rest of the year.

Bangko Sentral ng Pilipinas is more likely to deliver one or two 25-basis point key rate increase for the rest of the year, he told reporters on the sidelines of a business forum Friday afternoon. Three consecutive quarter-point hikes are unlikely, he said.

Still, the size and frequency of the Federal Reserve’s rate tightening is the “biggest source of uncertainty now,” Medalla said in an interview with Bloomberg Television’s David Ingles and Yvonne Man earlier on Friday. “We’ll not match them point per point, but if large, we have to react.”

BSP “more or less succeeded in anchoring inflation expectations” following four rate-hike moves that total 175 basis points this year, Medalla said in the interview. In separate remarks with CNBC on Friday morning, the governor said future rate increases would neither be half point nor 75 basis points as monetary officials have “done enough.”

That BSP isn’t done tightening echoes similar comments by Medalla’s peers from the UK to South Korea, as Fed officials have said they are far from controlling inflation. Yet, the BSP chief’s latest remarks on Friday suggest a less hawkish rate-hike path moving forward.

Policy makers have scope to raise borrowing costs further, Medalla said on Thursday, after delivering a half-point hike to rein in inflation that’s drifted above the BSP’s 2%-4% target for four out of seven months.

The peso, among the worst-performers in the region this month, closed 0.1% lower against the dollar, after falling by as much as 0.3% earlier in the day.

BSP will postpone an earlier plan to further reduce banks’ reserve requirement ratio by the end of the year, Medalla told Bloomberg Television. “We don’t want to confuse the market.”

(Recasts headline and lead, adds governor’s comments in sidelines of a forum.)