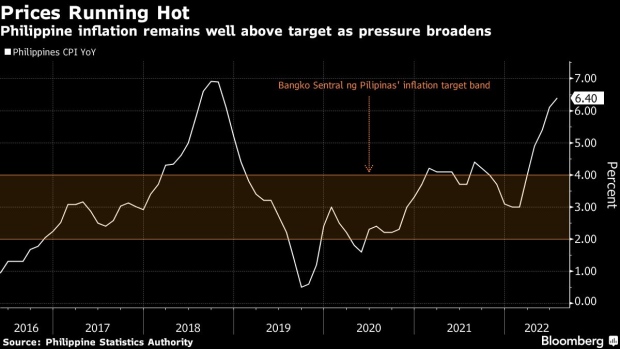 Bangko Sentral ng Pilipinas raised the overnight reverse repurchase rate by 50 basis points to 3.75%, as predicted by 16 of 22 analysts in a Bloomberg survey. That took the total increases this year to 175 basis points to rein in inflation that’s drifted above the BSP’s 2%-4% target for four out of seven months.

Medalla said any further policy moves will remain dependent on data, as well as the Federal Reserve’s monetary actions. That signals the BSP isn’t done with rate hikes yet, given Fed officials have said they are far from controlling inflation -- a line echoed by peers in the UK, Australia, South Korea and India.

The latest rate hike reinforced BSP’s commitment to anchoring inflation expectations. It still has a lot of work to do.

Domestic consumer prices rose 6.4% in July, the fastest since late 2018, while the peso is among the worst performers in Asia this month. Accelerating price gains are weighing on consumption, which was evident from a slower-than-expected economic expansion in the quarter through June.

Still, Medalla said favorable growth conditions “gives the BSP the flexibility to act against inflation pressures,” and that price-growth will probably peak in October or November.

Against a backdrop of rising prices, “BSP can carry out 25 basis point increases at each of the remaining policy meetings” this year, said Nicholas Mapa, economist at ING Groep NV. Inflation will likely peak in October, Mapa said.

The peso was little changed after the decision, and closed at 55.89 per dollar.

(Updates with Medalla’s comments in the third paragraph.)