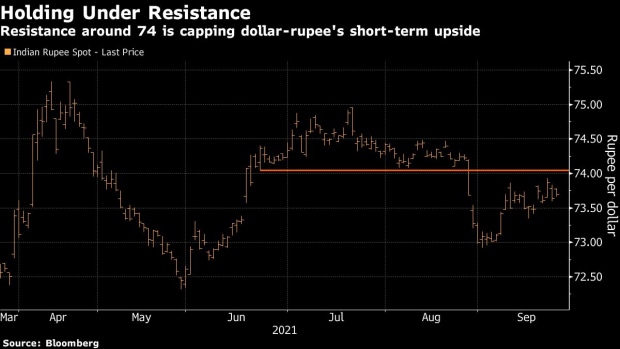 (Bloomberg) -- Indian investors face a crucial week with announcements due on a key index review for the nation’s bonds and also on the government’s borrowing plan for the next six months.

FTSE Russell will announce its annual review for equity and fixed-income markets on Thursday, with Indian debt already on a watchlist for potential upgrading. While the government has yet to say when it will announce its next borrowing program, officials from the central bank and finance ministry will decide the plan on Monday, people familiar have said.

“This week will lay the ground for the second half of the year, and could be an inflection point for the markets,” said Madhavi Arora, lead economist at Emkay Global Financial Services Ltd. in Mumbai. “Bond index inclusion could be a game changer for India, luring massive foreign inflows.”

The rupee has declined about 1% this month so far, and is among Asia’s worst performers, as the Fed’s hawkish pivot strengthened the dollar, even as the Reserve Bank of India has maintained its easy stance. A potential inclusion by FTSE Russell may pave the way for big foreign inflows and burnish the rupee and bonds.

The rupee appears poised for more near-term losses against the greenback given the currency pair’s slow stochastics, a momentum indicator, signaling it is still not in the oversold territory against the dollar. However, any further losses may be limited given initial rupee support around 74 level.

Indian bonds are already heading for the biggest monthly gain since April, and may get a further boost if the government decides to cut back borrowing for the second half of the fiscal year as revenue improves.

Index addition looks more imminent after a finance ministry official earlier this month said the nation has completed most of the work required to be a part of the global benchmarks.

India’s inclusion in the global bond indexes, expected by early 2022, may attract as much as $250 billion of inflows in the next decade, according to Morgan Stanley, which sees the 10-year bond yields to ease to 5.85% in 2022 from 6.18% on Friday. The move may lead to the rupee gaining by more than 1.5% to 72.50 per dollar, from Friday’s close, according to HDFC Securities Ltd.

Indian bonds are also under review for inclusion by JPMorgan Chase & Co., which typically assesses its index this month, while Bloomberg Index Services Ltd. last week said there is currently no estimated timeline in place for India’s inclusion in the Bloomberg Global Aggregate Index.

An index inclusion “could be a big trigger, leading to rapid appreciation in the rupee,” said Dilip Parmar, analyst at HDFC Securities. “The central bank may not be too aggressive in buying or selling dollars, and may give time for the rupee to adjust to the market.”