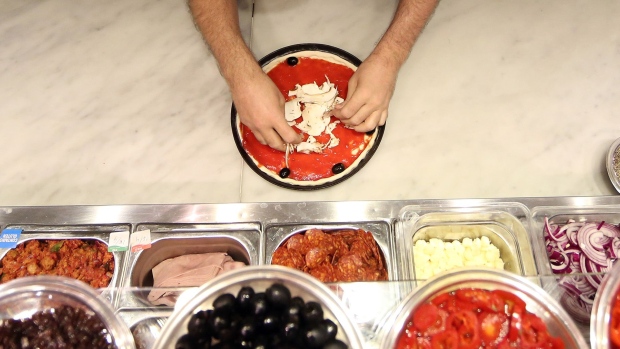 (Bloomberg) -- Investors rushing to secure a stake in PizzaExpress have pushed the price of its privately-traded shares up almost 50% in a week as the mid-market restaurant chain emerges from a bruising restructuring and the lifting of covid restrictions.

Trading in the stock, which is mostly held by creditors who took over the company last year, drove the equity value of the business to about 400 million pounds ($550 million) this week, according to people familiar with the matter, who asked not to be named because they’re not authorized to talk about it.

The shares started trading over-the-counter only last week after PizzaExpress sold a bond to refinance the old debt left after the 2020 restructuring, the people said. The company was initially valued at about 270 million pounds, they said. The equity changes hands through private platforms and the shares are illiquid.

A spokesperson for PizzaExpress declined to comment on trading activity and valuation.

The trade is the latest example of market exuberance as the U.K. reopens its economy after multiple lockdowns, even in sectors heavily battered by the pandemic and amid a spike of new infections in the country and contradictory government guidelines.

PizzaExpress’s blue-fronted restaurants, which have long been a feature of Britain’s high street and a popular haunt for meet-ups and children’s parties, were forced to shutter during the height of the covid crises in the dozens, with 1,300 announced job cuts, as the chain struggled as one of the pandemic’s corporate casualties.

PizzaExpress was already facing difficulties with its debt burden amid changing consumer habits in the U.K. and a costly expansion plan overseas when the pandemic hit, prompting creditors led by Cyrus Capital Partners, HIG Bayside Capital and Bain Capital Credit to take it over from Chinese private equity Hony Capital and cut its debt. The company’s equity value was estimated at just 162 million pounds at the completion of the debt restructuring last year, according to a bond investor document.

The three investment funds owned 52.9% of the business as of last week, Moody’s said in a note. Investors earlier this month piled into the new bond sale, placing around 2 billion pounds worth of orders for 335 million pounds of notes.