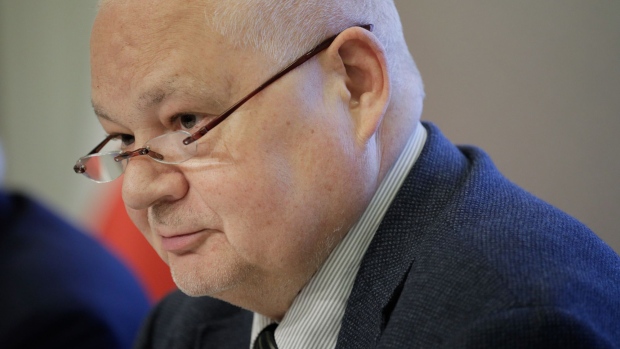 “In light of the latest data, I believe that central bank interest rates should rise more than the market predicts,” Glapinski said in response to questions from Bloomberg on Friday. “I’ll seek to persuade members of the Monetary Policy Council to extend the rate-hike cycle this year.”

The comments suggest the central bank may now move more rapidly in the coming months to quash inflation that has surged to the fastest pace in more than two decades, with no sign of abating. Glapinski said after the policy meeting earlier this month that the MPC should stick to raising rates in 50 basis-point increments. The next decision will come on Feb. 8.

Poland has lifted borrowing costs for four consecutive months since October, bringing the benchmark to 2.25%. Traders are betting on 90 basis points in hikes expected over the next three months and about 110 basis points over the next six months, according to forward rate agreements.

Glapinski had resisted calls to tighten monetary policy for most of last year before unexpectedly reversing his position and advocating for the first of the hikes in October.

Before that move, he had drawn criticism from economists and opposition politicians for doing too little to stop price growth -- which hit 8.6% in December -- from spiraling. He’s seeking reappointment for a second, six-year term in June.

The data on Friday showed industrial production jumped 16.7% from a year earlier and wages increased 11.2%, both above economists’ expectations.

Credit Agricole SA economists said on Friday after the data that the economy probably grew in the fourth quarter by more than the 7% they had previously expected. ING Groep NV expects the main rate to rise to 4% this year and to 4.5% in 2023.

Since governor’s sudden pivot in October, the government has moved in recent weeks to restrain inflation by cutting levies on everything from gasoline to food and gas and offering aid to the most vulnerable households. The International Monetary Fund warned last month the economy could overheat unless the central bank continues to raise rates.