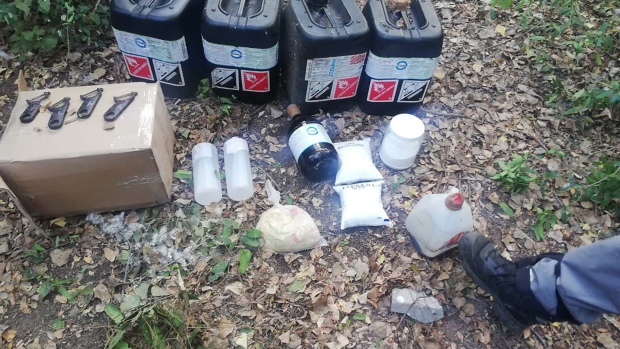 (Bloomberg) -- A political feud between the U.S. and Mexico is threatening to hinder an investigation into the diversion of chemicals by drug cartels, as an array of experts question whether one American company’s sale of those chemicals in Mexico had any significant legitimate purpose.

A Bloomberg Businessweek investigation revealed last year how Avantor Inc. cultivated a remarkable product line in the thick of America’s heroin epidemic: selling the sole essential heroin-making chemical across Mexico in jugs that are big enough to make lucrative quantities of drugs, but small enough to load into the trunk of a car.

Each of the company’s 18-liter jugs, which it sold to distributors and retailers nationwide, could make 20 pounds of pure “China white” heroin, or about 90,000 hits. Bloomberg reporters found crime-scene photos with Avantor’s chemicals at narco labs in Mexico’s top heroin-producing regions across the last decade.

The compound, acetic anhydride, is among the most strictly regulated drug-making chemicals under international narcotics laws. Yet Bloomberg found that Avantor, worth more than $17 billion today, sold thousands of jugs of it in Mexico, with 2019 sales alone reaching at least 21 metric tons. Irreplaceable in making heroin, acetic anhydride also has been used by cartels to make meth throughout the last decade.

Distributors and retailers said at the time that Avantor’s product, marketed for its purity, was a favorite of narcos and that its easy availability in Mexico was an open secret. Experts from Mexico and around the world are now questioning the extent of the jugs’ legitimate use.“For no reason would we ever ask for a 20-liter or 200-liter container of that chemical -- for no reason at all,” said Enrique Angeles, founder and director of the four-decade-old Medicinal Chemistry Laboratory at the National Autonomous University of Mexico, which hosts Mexico’s top-ranked chemistry program. (Although Avantor’s jugs have a 20-liter capacity, they were filled with only 18 liters of the chemical, because it’s heavier than water.)

In responding to questions for this article, Avantor repeated previous statements that it followed all applicable regulations in Mexico, that it sold only to authorized distributors and retailers, and that those resellers were responsible for verifying the legitimacy of customers. It began pulling the product from the country and destroying its existing inventory on the day Bloomberg Businessweek first published its findings.

Mexican President Andrés Manuel López Obrador ordered an investigation of cartel access to drug-making chemicals following publication of the Businessweek investigation. But a month later, relations between Mexico and the U.S. soured with the surprise arrest of a former Mexican defense minister, General Salvador Cienfuegos, in Los Angeles on drug and money-laundering charges. The U.S dropped all charges after López Obrador threatened the potential expulsion of American law enforcement agents in Mexico.

Even so, the Mexican president signed a new law that imperils security cooperation, especially on cross-border narcotics investigations. Mexican cartels are the virtual monopoly suppliers of heroin and meth sold in the U.S., where overdoses of both drugs have skyrocketed in recent years. Conversely, U.S. federal prosecutors have a near-monopoly on bringing major cases against cartel leaders, often with Mexican cooperation.

Prior to the crisis, López Obrador suggested the issue of American drug-making chemicals was politically sensitive and said no details would be released until after the U.S. elections. But 11 weeks after the polls closed, the Mexican Attorney General’s office declined to comment, beyond saying its investigation is ongoing. The political crisis escalated Jan. 14, when Mexico said it would not charge Cienfuegos.

Although what’s happening behind the scenes on any specific case is unclear, Vanda Felbab-Brown, a security expert at the Brookings Institution in Washington, said any politically sensitive investigation of narcotics trafficking has undoubtedly been pulled into the conflict.

“Things are really frozen, essentially everything,” said Felbab-Brown, who consulted with senior U.S. officials on the issue as Mexico passed the new law, which significantly restricts the ability of the U.S. Drug Enforcement Administration to work in Mexico. “It’s a huge crisis in the relationship. And at this point it’s not just a crisis, it’s a huge setback.”

Before it ceased Mexican sales, Avantor declined to say who the largest legitimate users of its jugs were, but it identified two specific industries as customers for them: mining and life sciences. It sold the jugs through its laboratory-chemicals line, which is the heart of the company’s global business.

Mining professionals and experts from Mexico, Canada, South Africa and Europe contacted by Bloomberg said they were unaware of any usage of acetic anhydride in their industry. Mining companies use modest amounts of other chemicals in their labs to test the precious-metal content of rocks. They also use them in industrial quantities, which are sold in tanker trucks or industrial-sized containers rather than jugs, to separate valuable metal from worthless ore.Mexico’s Fresnillo Plc., the world’s largest primary silver producer and Mexico’s second-biggest mining firm overall, unearths silver, gold, lead and zinc in the country. It told Bloomberg it didn’t employ acetic anhydride in its processes or facilities. “We don’t use acetic anhydride in any of our operations,” said Gabriela Mayor, head of investor relations for the London-listed company, which is headquartered in Mexico City.

Stephen Foley, an associate professor of chemistry at the University of Saskatchewan, headed a research team trying to develop alternative chemicals for precious-metal recovery and mining. He said he was unaware of any use of acetic anhydride in the industry, that even its potential use would be economically unsustainable, and that he could not find any published scientific literature indicating the chemical had ever been used in precious-metals mining.

Other experts in mining chemistry and metallurgical engineering, from Europe and South Africa, also said they had never heard of its use in their field.

Virtually every organic chemistry lab in the world does purchase and use acetic anhydride, which is a reagent, meaning it’s used to spark reactions. But top laboratory directors and professors from Mexico’s two leading university chemistry programs, along with counterparts from universities in the U.S. and Europe, said the chemical is procured and used in significantly smaller containers than 18 liters, because of both practical and safety concerns.

Professors with decades of experience said they’d never seen an 18-liter jug of acetic anhydride in a lab and that they believed it was highly unlikely one would ever be used.

Angeles, head of the Medicinal Chemistry Laboratory, said he estimated the probability of finding even a single 18-liter jug of acetic anhydride in a research lab or classroom at 1%.

In answering questions for this article, Avantor described the views of laboratory chemists as misinformed, but declined to name any end users from the life-sciences industry in Mexico, or address any of the specific issues that scientists raised. It also declined to cite specific applications or buyers in the Mexican mining industry for its jugs. The company did say some of its competitors sell individual acetic anhydride containers in the same size range, but didn’t name them.

Avantor also sold glass bottles of the chemical containing just half-a-liter or one liter for lab use in Mexico. Angeles, like other professors and professionals around the world, said those container sizes were the standard in life-sciences labs. The small glass bottles hold enough of the chemical to last up to two years, Angeles and others said.

In addition to the small amounts needed, safety concerns make it unlikely anyone would use an 18-liter jug in a research or teaching lab, lab directors and professors said. Due to the chemical’s flammability, the large volume of it in just one of Avantor’s plastic jugs would create an unacceptable risk in an environment where safety is sacrosanct, chemists said.

Filiberto Vazquez, a biochemical engineer at Mexico’s National Polytechnic Institute, is a member of the Mexican government’s Science Advisory Council and is one of his nation’s most-honored scientists. Asked if an 18-liter jug of acetic anhydride could ever be found in a lab, Vazquez said, “No, no -- it’s too much to manage. You need to be careful about safety. The largest you’ll find is one liter.”

Marya Lieberman, a professor in the department of chemistry and biochemistry at the University of Notre Dame in Indiana, agreed that safety concerns would likely be a deal killer. “The amount of toxic and flammable liquids needs to be minimized in each lab. An academic research lab would not be likely to use even a single 18-liter carboy,” Lieberman said. “I checked our inventory system and didn’t see any 18-liter containers in use by any of the organic groups at my university.”

Others seemed to have little doubt about why a laboratory chemical used in such small amounts would be purchased in a relatively large container, and in such significant numbers. “It does sound like this is for the illegal drugs industry,” said Andrea Sella, a professor of chemistry at University College London. “I’ve checked with a synthetic chemistry colleague, and he too immediately said, ‘They’re making drugs.’ Certainly, in the U.K. you would get questions were you to order 18-liter quantities” of acetic anhydride.

Avantor declined to comment on the suggestion that it should have questioned the basis for its acetic anhydride sales in Mexico.

Former top federal narcotics prosecutors in the U.S. who now work in private practice advising corporate and white-collar clients told Bloomberg that Avantor could face legal liabilities for its sales of the chemical in Mexico. They said a decision to immediately gather up and dispose of the entire supply of the chemical in Mexico -- and cease further sales -- was an extraordinary step to take.The former Department of Justice prosecutors spoke on the condition of anonymity because policies at their law firms forbid them from making public comments about such matters. They said the company could face questions from regulators, law enforcement agencies and its own auditors. The former prosecutors also said the question Avantor declined to address for this article -- whether it should have questioned its Mexican sales -- could be an important one.

Avantor declined to comment on communications with authorities in Mexico or the U.S., saying it operates “in a highly regulated industry and frequently communicates with relevant agencies.” It also said it would assist with official inquiries about its business practices.