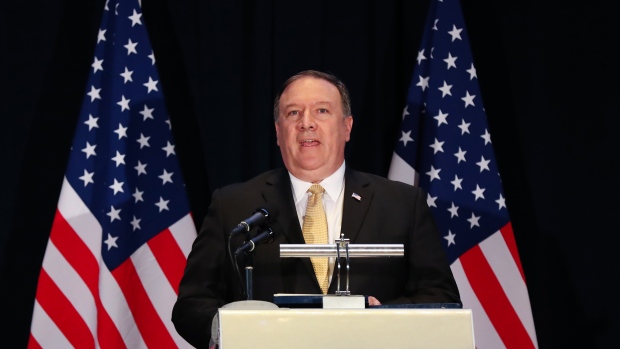 Secretary of State Michael Pompeo came close to issuing an us-or-them ultimatum to nations buying from Huawei Technology Co., saying in Hungary that contracts with the Chinese networking giant could limit the availability of U.S. equipment.

“If that equipment is co-located where we have important American systems, it makes it more difficult for us to partner alongside them,” Pompeo told reporters in Budapest on Monday, when asked what message he would send about Huawei. “We want to make sure we identify the opportunities and the risks with using that equipment. And then they will get to make their decisions.”

The Shenzhen, China-based telecoms company has made Hungary a key base in Europe, touting investments of US$1.2 billion in the country. The Trump administration, which wants to boost its partnership with Hungary and other central European countries, is warning that nations using Huawei equipment in critical infrastructure could open themselves to security risks.

Pompeo didn’t elaborate on what “important American systems” he was referring to. But the top U.S. diplomat is making push-back against Huawei a key theme of his trip to Europe this week, with additional stops in Poland, Slovakia, Belgium and Iceland. The administration has argued for providers of next-generation mobile gear to rely on U.S. companies such as Cisco Systems Inc.

“They get to make their own decisions with respect to these things,” Pompeo said. “What is imperative is that we share with them the things we know about the risks that Huawei’s presence in their networks present.”

Hungarian Foreign Minister Peter Szijjarto, in the joint briefing with Pompeo in Budapest, pushed back against criticism that Hungary wasn’t doing enough to counter China’s influence, in particular Huawei. He noted that Hungary’s trade with China represented 1.2 per cent of the EU’s overall trade with that country and that any cooperation shouldn’t endanger the country’s partnership with the U.S.

“If you look at the Chinese company which is very often in the news nowadays regarding telecommunications, are they present in Hungary? Yes,” Szijjarto said. “Who are their major contractors? A German and a British company. So when it comes to China, I think hypocrisy should finally be left behind.”