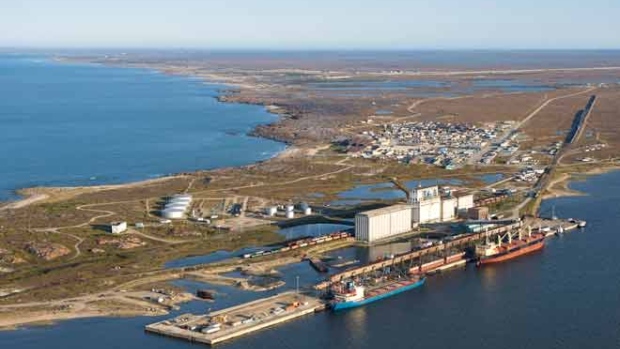 Port of Churchill , Courtesy of portofchurchill.ca

For the first time since the Great Depression, Canada will soon have no deepwater link to the Arctic.

As of Aug. 8, the Port of Churchill will cease operations. While the owner – Denver-based OmniTrax – has not responded to multiple requests from BNN to confirm the shutdown, the mayor of the northern Manitoba town told Commodity News Service Canada all shipments will be suspended by the start of next week.

“There was no communication from OmniTrax at all on this decision,” said Mike Spence, mayor of the community of about 750 people, where roughly one in ten residents has historically been employed at the port. Churchill resident and port employee Joe Stover posted a photo of the layoff notice he received on Twitter earlier this week.

“The Port of Churchill just laid everyone (myself included) off,” Stover wrote in an earlier post. “[They] told us there will be no grain season this year.”

Owned by the federal government since it began operations in the fall of 1931, OmniTrax purchased the port in 1997 along with the connected 1,000km Hudson Bay Railway. The American company put the port and the railway up for sale earlier this year, with a group of Manitoba First Nations reportedly being interested in acquiring those assets.

The group, led by the Mathias Colomb First Nation at Pukatawagan, has not commented publicly since news of the closure first began to circulate. Shipments from the Port of Churchill, meanwhile, have recently fallen dramatically.

Approximately 184,000 tonnes of grain were loaded onto tankers docked at the port during the 2015 shipping season. That compares to a long-term average of more than 500,000 tonnes, or nearly triple the total volume moved last year.

Pallister said OmniTrax  shut down the port in hopes of convincing the new government to renew the deal, but the premier refused, telling reporters “I don’t respond ever to threats.”

Local politicians and labour leaders, meanwhile, are growing increasingly frustrated with the silence they have received in response to their questions about the future of the port.

“For months we have been asking for information about the potential sale [of the port and railway] and they ignored us,” Teresa Eschuk, regional vice-president of the Union of Canadian Transportation Employees, told CTV Winnipeg. The labour group had about 60 members working at the port last year.

“There was no discussion, no warning, nothing,” Eschuk said.

Niki Ashton, NDP Member of Parliament for Churchill-Keewatinook Aski, launched a formal petition earlier this week calling on the federal government to re-nationalize the port. Despite a three-year-old federal-provincial task force report calling for the need to “explore new directions” for the Port of Churchill “with a greater sense of urgency,” the political appetite for action has waned.

Ottawa has been subsidizing the port since 2012 when the Canadian Wheat Board’s grain marketing monopoly was shut down. The annual payment – equivalent to $9.20 per tonne of grain shipped through the port – was scheduled to expire next year.

“I am disappointed in the decision by OmniTrax to close the port,” federal Economic Development Minister Navdeep Bains said in a statement last week, adding his heart “goes out to all the families that are affected.” In terms of a solution, Bains’ statement only noted he was in “ongoing discussions” with his cabinet colleagues and will “continue to monitor the situation closely.”

According to the Western Grain Elevators Association, the Canadian grain harvest this year could be as high as 74 million tonnes, which would approach the 76.8-million-tonne record set in 2014. Bumper crop expectations has only served to heighten concerns over the Port of Churchill shutting down.

“This is a major blow to us,” Dan Mazier, president of Keystone Agricultural Producers, said in a statement, “We’ve had so many issues shipping our grain east and west to port, and [the Port of Churchill] was an excellent option.”

“If ever there was a case for government intervention, this is it.”

The port’s closure puts more pressure on Canada’s other deepwater ports to shoulder more of the grain export burden, though it is unclear how much more they will be able to handle. The Port of Vancouver, for example, has been operating near its capacity for the past several years and recently has been struggling to implement a $300-million expansion plan.

“The Port [of Churchill’s] viability is more than Manitoba’s issue alone and more than the movement of grain,” said the Manitoba Chamber of Commerce in a release calling for government intervention.

“It is the Gateway to the Central Arctic, and its future is important to all of Canada.”