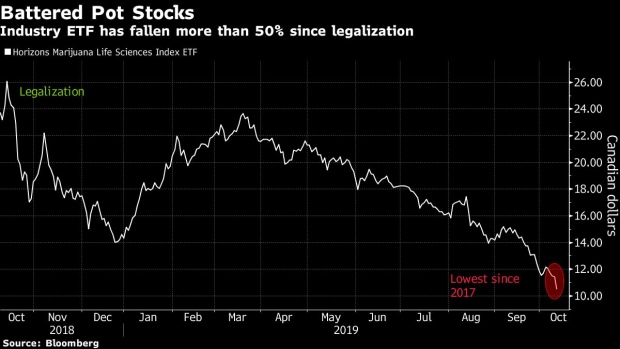 This Thursday marks the one-year anniversary of Canada’s legalization of recreational cannabis and most of the sector’s stocks have never regained the peaks they hit shortly before that date.

Instead, after a brief reprieve in the first quarter of this year, they’ve been on a consistent downward slide, with the Horizons Marijuana Life Sciences Index ETF now down 56% from its recent high on March 19.

Last week was a particularly brutal one, as Hexo Corp. joined the ranks of pot companies that have lowered earnings expectations. Its stock tumbled 23% Thursday and a further 11% Friday after the company said its fourth-quarter revenue will come in well below analyst expectations and withdrew its forecast for fiscal 2020.

That hammered the entire sector, with the Horizons fund -- which trades as HMMJ in Toronto -- hitting lows not seen since 2017.

Expectations for the coming earnings season may still be too rosy, according to Jefferies analyst Ryan Tomkins.

“Into the next quarter we continue to think consensus may be expecting too much sequentially from names in a market where growth is not significant (yet), some capacity is being earmarked for extraction, and costs are increasing as preparation for derivatives ramps up,” Tomkins said in a note.

We’ll get a better sense of how the Canadian market is shaping up when Aphria Inc. reports results for the quarter ended Aug. 31 on Tuesday. The Leamington, Ontario-based producer pulled off a rare feat in its last quarter when it became the first large cannabis company to report a profit, with a 75% increase in revenue, sending its shares up 40% in one day.

CIBC analyst John Zamparo believes Aphria’s good fortune reversed in the latest quarter, and expects it to report a loss and a slight sequential decline in revenue to C$126 million.

“Licensing delays, a protracted retail rollout in Canada’s most populous provinces and slow replenishment by provincial boards have hurt demand, profitability and growth,” he wrote. Despite the weakness, he expects Aphria to reiterate its fiscal 2020 guidance of C$650 million to C$700 million in revenue and C$88 million to C$95 million in adjusted earnings before interest, taxes, depreciation and amortization.

Tomkins at Jefferies thinks those numbers are “no longer possible” and expects Aphria to reduce them. However, he remains bullish on the stock, citing its strong global outlook, compelling valuation and the possibility for “a material move into the U.S. in the current year.”

For a more comprehensive look at the state of Canada’s cannabis market one year in, watch for our coverage on Tuesday.