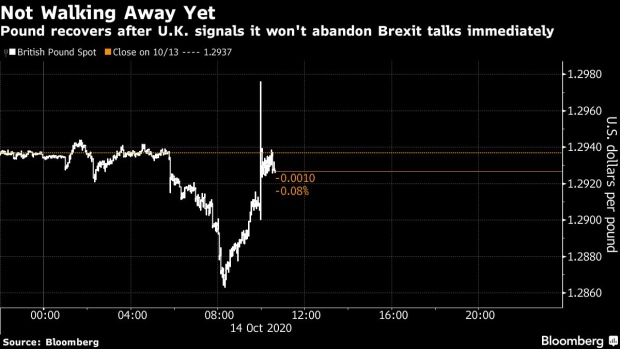 Sterling recovered against both the dollar and the euro after an earlier drop, following a report that European Union leaders meeting Thursday in Brussels will say progress hasn’t been sufficient.

U.K. Prime Minister Boris Johnson had previously said he will walk away from the talks if there is no clear progress by the summit. He’ll now make a decision on whether to end talks after this week’s meeting, according to a person close to the negotiations.

“As has been the case in the past, whenever the Brexit threat was pushed further into the future, the pound tended to recover some ground,” said Valentin Marinov, head of G-10 FX strategy at Credit Agricole SA. “While this will not remove the cloud of Brexit uncertainty hanging over the pound, it will give the pound some breathing space, with investors now focusing on November for a potential breakthrough in the talks.”

Officials on both sides are still at loggerheads on several key issues including fishing rights and state aid.

The pound will remain vulnerable to the trade negotiations, but the odds of a no deal have fallen to around 20%-25% and the currency should finish the year at $1.35, according to Toronto-Dominion Bank.