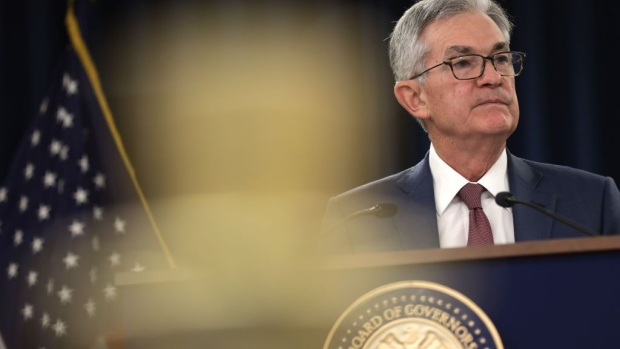 Federal Reserve Board Chairman Jerome Powell speaks during a news conference October 30, 2019 in Washington, DC. The Fed announced that it will cut interest rates for the third time this year for quarter point. , Photo by Alex Wong/Getty Images

Wall Street bond traders will be firmly focused on events in Washington on Wednesday morning in a hunt for clues about the direction of the economy and risk sentiment.

But while they may keep one eye on the first public hearings in the House’s presidential impeachment inquiry, what matters most right now for the US$16.5 trillion Treasuries market will be unfolding elsewhere on Capitol Hill: Federal Reserve Chairman Jerome Powell’s appearance before Congress’s Joint Economic Committee.

After policy makers cut rates last month at the third straight meeting, investors are looking for confirmation that Powell sees the economy on solid enough ground to pause in December.

Powell “might do something more market-moving than what’s coming out of the impeachment hearings,” said John Briggs, a rates strategist at NatWest Markets. The impeachment investigation feels like “more of a drawn-out process.”

Markets are showing little concern about the prospect of impeachment so far, with the S&P 500 Index closing Tuesday near a record high.

“It’s when you start to hear rumblings that the president’s losing GOP support in the Senate that asset prices could start to move,” said Kristina Hooper, Invesco Ltd.’s chief global market strategist.

While unlikely, that could undermine stocks and be bullish for gold and Treasuries, she said.

The impeachment hearings are scheduled to start at 10 a.m. Washington time, while Powell’s address begins at 11 a.m.

Treasuries have been battered in recent weeks amid renewed optimism over U.S.-China trade negotiations and diminished expectations for Fed rate cuts. Benchmark 10-year notes yield 1.93%, not far below three-month highs.

Briggs expects that Powell will strike a similar tone to October’s policy meeting, where he hinted at pausing. While a hawkish tone could lead yields higher, any sense of caution from the Fed chief could drive rates lower, according to Briggs.

“If he’s dovish at all, that would be a surprise,” he said.