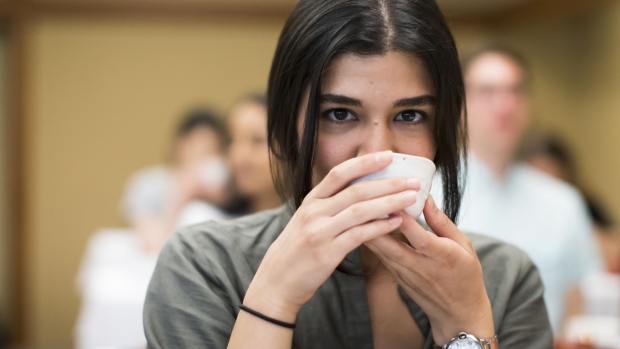 MONTREAL -- A McGill University professor says tea lovers may be swallowing billions of tiny plastic particles along with their favourite brew.

Nathalie Tufenkji published a study Wednesday in the U.S. journal Environmental Science & Technology that examined the amount of microplastics and nanoplastics released when four unnamed brands of tea bags were steeped in hot water.

Researchers at the Montreal university focused their analysis on premium brands that come in voluminous, silk-like bags, instead of the more common paper variety.

"We were expecting to see some particles -- obviously, just naturally from putting this material in hot water -- but we were shocked when we saw that it's actually releasing billions of particles from a single tea bag," Tufenkji said Wednesday.

After emptying the bags of their tea leaves, researchers submerged the bags in "ultra pure" water heated to 95 degrees Celsius for five minutes. When they analysed a sample of the water, they found that a single plastic tea bag released approximately 11.6 billion microplastics and 3.1 billion nanoplastics into one cup.

Tufenkji said that's far higher than what other studies have found in other foods, for instance table salt, a kitchen staple that's been reported as containing plastic. While 16 micrograms of microplastic was recorded in one cup of tea, table salt has been found to contain 0.005 micrograms per gram.

The health risk of ingesting microplastics and nanoplastics is unknown, Tufenkji said, and her study only measured how much plastic was released by plastic tea bags.

She said a "very preliminary" toxicity study exposed water fleas to the steeping water, and researchers noted the tiny invertebrates behaved differently and appeared to have an altered body shape.

But she stressed that there is no evidence of toxicity for humans.

"We don't know if it is dangerous," she said. "There's actually almost no studies on the toxicity of ingesting microplastics or nanoplastics so that's something to be determined, but we do know (some tea bags are) releasing a lot of plastic into the actual tea."

In a statement to BNN Bloomberg, DavidsTea said their sachets are made with a plant-based biodegradable mesh or hemp, and contain no plastics.

Researcher and chemical engineering student Laura Hernandez agreed, cautioning anyone from reading too much into the tea study.

"There's really much more research needed before I can state anything but I don't really think one cup of tea will kill you. No. We've been drinking this tea for a while now," said Hernandez, a fourth-year PhD student.

"This is more a call for tea producers to stop using plastic in their packaging because they have so many other options. There's really no need for it."

As for the reason why the McGill team found such high plastic levels, Hernandez suggested one factor was that they looked for smaller particles than most studies -- microparticles and nanoparticles, which are a thousand times smaller than microparticles.

"Our numbers are very high in comparison to other studies but we're also looking at smaller particles," said Hernandez.

"Most other studies are looking at particles above 100 micrometres.... The numbers they're getting for instance in bottled water is reported to be 10.1 microparticles per bottle of water, whereas we're getting billions of particles."

The study also found that far fewer particles were released when the tea bag was steeped at room temperature for five minutes.

But that's not the norm when brewing tea, the study acknowledges, adding that tea drinkers often heat water above the measured temperature of 95 °C and that even "food grade" plastics may degrade or leach toxic substances when heated above 40 °C.

Tufenkji said she now avoids tea bags containing plastics, but largely because of her aversion to single-use plastics.

"I do drink loose-leaf tea or tea in a paper tea bag," said Tufenkji.

"I still continue to enjoy tea, that's for sure."