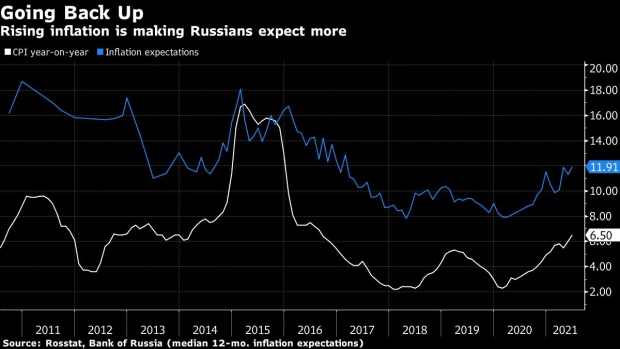 (Bloomberg) -- The Bank of Russia spent years convincing citizens that it could bring inflation under control. A few months of surging prices has been enough to demolish that progress.

“There was a short period when inflation fell out of the top three problems worrying the population,” said Valery Fedorov, head of state-run pollster VTsIOM. “People didn’t have time to believe in it.”

Racing to rein in surging prices, the Bank of Russia has raised interest rates by 125 basis points this year and most economists surveyed by Bloomberg expect a hike of a full percentage point Friday. That would be the single biggest jump since the ruble crisis back in 2014.

“Inflation expectations did not die, they were just hidden,” said Oleg Vyugin, a former senior central bank official. “Now it will take a long time to fix this.”

While central bankers in developed economies are still debating how long the current price increases will last, their colleagues in emerging markets are struggling to rebuild confidence that they will ever stop. Russia’s been hit especially hard, with rising demand at home, ruble weakness and worldwide price pressures pushing up inflation.

Annual inflation is running at 6.5%, the highest level in nearly five years. But expectations have spiked much higher, to 11.9%, according to surveys conducted by the central bank.

“The central bank keeps raising the rate,” said Alexander Ryazanov, who owns stakes in bakeries and apple orchards. “But I don’t expect inflation will really go down.”

He said prices for key ingredients like sunflower oil and sugar are up 65% or more from last year. The cost of plastic and paper for packaging has doubled.

“While the official agencies claim that incomes are rising, I know what’s happening at my companies,” he said. “We’re raising salaries, but not by as much as prices are going up.”

Andrey Pavlov, owner of Zenden, which produces and sells shoes across Russia, said, “the cheaper the cost of the product, the more prices have gone up.” Cuts in labor and other costs aren’t enough to offset the increases, he said. “We don’t know if inflation will last for a long time or not.”

For most of the three decades since the collapse of Communism, Russians have been used to steadily rising prices, including memories of hyperinflation in the 1990s. Only the Bank of Russia’s steady push in the last five years to target inflation finally got the annual rate down to the low single digits. It even spent most of last year below the central bank’s 4% goal.

“Since we started inflation targeting in 2014, we had a favorable background because inflation in the world was low,” said Natalia Orlova, economist at Alfa Bank in Moscow. “Now we’re importing not disinflationary factors but inflationary ones.”

Citing price pressures at home and on world markets, the Bank of Russia is warning that it won’t get inflation back to the target until the second half of next year.

“When prices aren’t rising fast, Russians don’t think that happiness has come and the problem is gone,” said Fedorov, the pollster. “They think it’s temporary and everything will soon start going up again.”