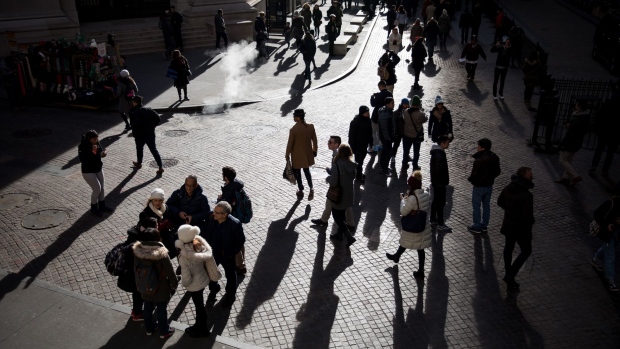 About 20% of private loans in the third quarter had lending agreements known as “covenant-lite,” giving creditors fewer ways to trigger bankruptcies or other restructurings for companies that fall into distress, according to investment bank Lincoln International. That’s up from 10% a year ago. And loans offering lenders better protections with two covenants fell to 30% from 50% over the same period.

The shift is making the debt look more like syndicated loans that banks sell to investors, but for lenders there’s a key difference: in the syndicated market, money managers end up with just a slice of any loan, sharing risk with dozens of others. In private credit, lenders including standalone funds and credit arms of buyout fund managers like Blackstone Group Inc. or KKR & Co. make much bigger bets in every transaction as they hang onto the loans, leading to more potential losses if even one borrower falls into trouble.

When economic growth slows and companies begin to struggle, private lenders could find themselves with fewer levers for fixing their loans after giving up protections. On the flip side, borrowers will have more breathing room to navigate the difficulty.

Companies have the power to press for looser covenants after private credit funds have raised a record $87 billion in the first half of the year. In the third quarter, they’ve added another $41 billion, according to data provider Preqin Ltd.

That kind of fundraising has helped the private credit market grow to around $1 trillion in size, and has allowed firms that historically made loans under $500 million to instead providing financing running into the billions of dollars. In September, direct lenders committed financing for the leveraged buyout of Inovalon Holdings, a healthcare software company, for $3.25 billion of term loans.

Firms are aiming for returns of potentially 8 percentage points of yield, far more than they can earn in other markets. That means lenders can only cut the rates they charge companies so much, said Ron Kahn, a managing director at Chicago-based Lincoln, in an interview with Bloomberg. It’s easier for them to compete by offering easier covenants instead, he said.

“If they start a race to the bottom they’re not going to be able to get the 7% to 8% they’ve promised their investors,” Kahn said. “There’s a floor to how low they can go.”

Often, when lenders do demand covenants, they are making the requirements so easy for borrowers that the safeguards don’t do much anyway, Kahn said.

In some situations, for example, Ebitda -- a key measure of earnings -- would have to fall by 25% to 30% for the covenants to be triggered, Kahn added. Delayed-draw term loans -- which allow companies to borrow more without having to go back to lenders under specific conditions -- are also back in a big way, Kahn said.

Investors have poured so much money into direct lending partly because private credit fared better during the pandemic than some people had predicted. Some private equity owners pumped more cash into portfolio companies to get them through the worst of the turmoil, which helped. The debt’s floating rate structure, like leveraged loans, has also broadened its appeal as a hedge against inflation.

And while there may be limits on how much lenders will cut prices, spreads are still narrowing as credit broadly has rallied over the past year. The average unitranche spread is now 570 basis points over the London interbank offered rate, down from about 620 basis points in the second quarter, according to Lincoln’s Senior Debt Index.

Lincoln’s findings are based on the credit agreements of about 2,500 different portfolio companies from 100 different asset managers.

Investment-grade companies are selling 13 bond deals in the U.S. market, including a large offering from Baxter International Inc., a medical supply device and supply company that is funding its planned acquisition of Hill-Rom Holdings Inc.

Issuance slowed on Tuesday, although Monday’s barrage of new deal announcements suggests some issuers could open books on planned debt offerings later in the week.

At least three borrowers were looking to price dollar bonds Tuesday, with more Chinese companies returning to the dollar market after a strong start to the week. DBS Group and China Great Wall are marketing dollar notes, while Shaoxing Shangyu Urban Construction sold a sustainable bond.