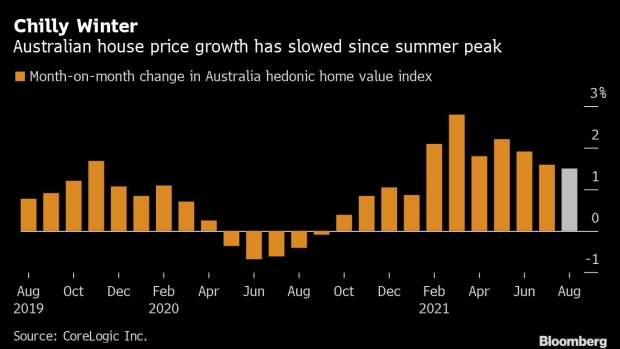 A local resident looks at the remains of her home that was burned out by wildfires near Lake Conjola, New South Wales, Australia, on Wednesday, Jan. 15, 2020. The Australian fires have burned across an area twice the size of Switzerland while claiming at least 28 lives and destroying thousands of homes. Prime Minister Scott Morrison said the nation must become more resilient to the impacts of climate change, and proposed a review of the government’s response to the wildfire crisis. Photographer: David Gray/Bloomberg , Bloomberg

(Bloomberg) -- Some property in parts of Australia exposed to climate change and wild weather could experience valuation declines that leave lenders with less protection in the event of a default, according to Reserve Bank research.

About 3.5% of dwellings in Australia already fall under an international definition of being at “high risk” from climate damage, RBA economists Kellie Bellrose, David Norman and Michelle Royters said in a research paper.

But the RBA economists note that it’s the rise in climate risk that isn’t yet reflected in property prices that’s key when considering the banks’ exposures in climate-sensitive regions.

The problem could be acute in Australia, the world’s driest inhabited continent, as mortgages account for about two-thirds of major banks’ portfolios, according to the research.

“Climate change creates risks for the Australian financial system that will rise over time to become substantial if they are not properly managed,” they wrote. “If current values do not fully reflect the longer-term risks of climate change, housing prices could decline, leaving banks with less protection than expected against borrower default.”

To estimate potential climate change impact on mortgage books, the researchers translated estimated falls in housing prices in climate-sensitive suburbs by 2050 into an implied change in borrower leverage, as measured by loan-to-value ratios.

The outcome suggest climate change will result in around 400,000 more loans, or 2.5% of all loans, having a loan-to-value ratio greater than 80%. Within this, around half move to greater than 90%.

Classifying a dwelling as “high risk” is based on the so-called value at risk -- that is, the annual expected cost of climate-related damage relative to the replacement cost of dwellings -- exceeding 1%.

A VaR change of 0.4 percentage point is equivalent to roughly a 10% decline in housing prices due to climate risk, according to the paper. Increases in insurance premium costs “would be incurred every year, and therefore could result in sizable declines in property values.”

Under a different methodology used as a cross-check, the regions projected to see the biggest rise in the proportion of properties as high risk out to 2050 include populous areas in southeastern Queensland and northern New South Wales, which have a large number of houses at risk of coastal inundation.

The authors acknowledged limitations to this method. The risks to banks “may be overstated in this exercise because we assume that banks’ exposures will not change in the future,” though banks are expected to increasingly incorporate climate risks into their lending decisions.