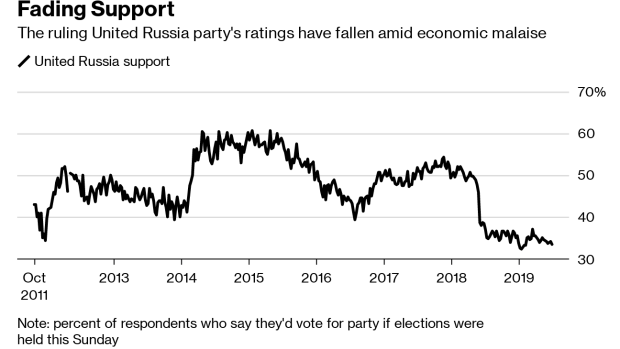 (Bloomberg) -- With public support for President Vladimir Putin wilting, the Kremlin is considering changing election rules in an effort to secure its lock on parliament ahead of potentially vital decisions that could extend his rule.

Putin faces the end of what under the constitution must be his final presidential term in 2024. Though he’s given no public hint of his intentions, aides and advisers are working on ways to allow him to prolong his rule, already the longest since Soviet dictator Josef Stalin, according to people involved in the efforts. Maintaining the ruling United Russia party’s two-thirds majority in parliament -- necessary for making constitutional changes -- could be essential to that.

But with less than 18 months to go before the parliamentary vote, United Russia’s popularity has dropped along with Putin’s after five straight years of falling consumer incomes. Amid poll ratings at a 13-year low, the party’s candidates have lost several recent regional elections, despite the Kremlin’s monopoly control of the system.

“Today, all the actions and initiatives of United Russia have only one result -- an increase in the protest mood in the country,” the Moskovsky Komsomolets daily wrote this week. “In the regions, people avoid it like the plague.” Calling the party “toxic,” the usually pro-Kremlin paper appealed for it to disband.

The Kremlin is now considering cutting the share of seats elected by party lists in the 450-member State Duma lower house of parliament to only 25% from half under current law, according to two people familiar with the preparations who spoke on condition of anonymity to discuss confidential matters. The rest would be elected in local districts where many pro-Kremlin candidates run as nominally independent to avoid the stigma of United Russia membership.

The changes would take effect for the next parliamentary elections in 2021, giving Putin full control of a new legislature three years before the end of his term, one of the people said. The Kremlin has shifted the proportions several times before to suit its electoral needs and the changes don’t require constitutional amendment. The authorities have tight control over who can get on the local ballots and usually block opposition candidates.

The mixed voting system in 2016 enabled United Russia to secure a three-quarters majority with only 54% of the vote because pro-Kremlin candidates successfully campaigned as independents in local districts. But the party’s support has since plunged to a third as popular opinion turned against the authorities amid the slump in living standards. Six Kremlin-backed gubernatorial candidates in September’s elections have dropped their party affiliation to run as nominally unaffiliated after United Russia contenders lost last year.

With the current voting system, United Russia at best will obtain a simple majority in the Duma in 2021, said Vladimir Zhirinovsky, leader of the nationalist Liberal Democratic Party, one of three other parties in the Duma. “United Russia’s national score can hardly exceed 20% to 30% - that’s our forecast.”

While the Communists and Zhirinovsky’s LDPR rarely challenge Kremlin initiatives, at a regional level they pose a growing threat and in the Duma they can force the authorities to make unwanted concessions.

Keeping a strong hold on Parliament would widen Putin’s room for maneuver. It could potentially allow the 66-year-old Russian president to switch roles, keeping the reins of power as head of the ruling party and prime minister with expanded constitutional authority at the expense of the presidency, said two people close to the Kremlin and a ruling-party legislator.

But it’s not clear whether Putin would back such a switch, since shifting power to the parliament would go against the presidential system that’s widely seen to suit Russia, said Alexei Mukhin, head of the Moscow-based Center for Political Information.

Efforts to coax the leader of neighboring Belarus into a potential merger with Russia -- which would enable Putin to take over as head of the united state -- have floundered. And the move earlier this year by Kazakh President Nursultan Nazarbayev to step down while keeping in charge through a foreign policy and security role isn’t seen by many as a realistic model in Russia because the new president could theoretically still challenge Putin.

With the Russian leader repeatedly ruling out abolishing term limits, discussion of possible scenarios for 2024 is in a deadlock, according to Sergei Markov, a Kremlin political consultant. “In any case, whatever he decides in the end, Putin will need strong support from parliament,” he said.

--With assistance from Stepan Kravchenko and Irina Reznik.