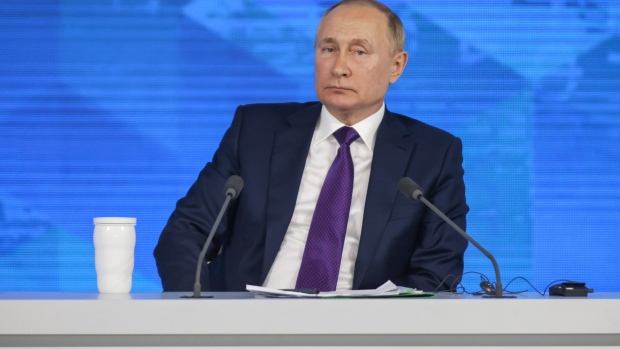 Vladimir Putin, Russia's President, during his annual news conference in Moscow, Russia, on Thursday, Dec. 23, 2021. Russia is continuing to build up forces close to Ukraine even as it’s preparing for security talks with the U.S., keeping up pressure with a deployment that could turn into a rapid invasion or a long-term threat. , Bloomberg

(Bloomberg) -- Russian President Vladimir Putin said trade with India and China has strengthened amid Western oil sanctions in response to the invasion of Ukraine.

“Russian oil supplies to China and India are growing noticeably,” Putin said in a video address to the BRICS Business Summit on Wednesday. Despite all the difficulties in the global economy due to “politically motivated sanctions,” total trade with Brazil, India, China and South Africa rose 38% in the first three months of the year to $45 billion, he said.

Russian oil producers have been sending more crude to Asian buyers, mostly to China and India, at steep discounts as European buyers reduce purchases. The country didn’t want to turn away from Europe’s energy market, but it has been pushed out and will find other customers, Deputy Prime Minister Alexander Novak said last week.

At the start of 2022 some two-thirds of Russian crude was being exported to Europe, now about 50% of nation’s oil is going to Asia, according to Gazprom Neft Chief Executive Officer Alexander Dyukov.