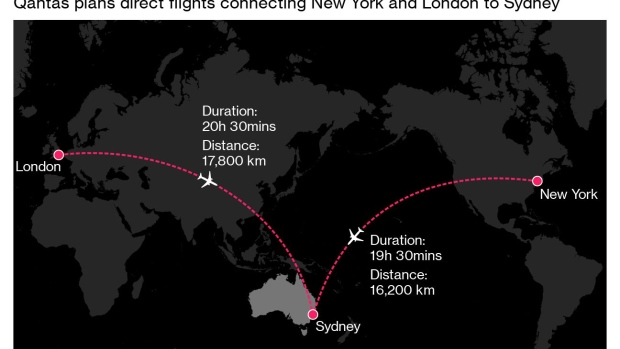 Alan Joyce, chief executive officer of Qantas Airways Ltd., during the World Aviation Festival in Amsterdam, Netherlands, on Wednesday, Oct. 5, 2022. Qantas needs to fix operational problems but that it is returning to normality, Joyce said. , Bloomberg

(Bloomberg) -- Qantas Airways Ltd. Chief Executive Officer Alan Joyce warned against lengthy delays to jetliner deliveries as he prepares to meet with the head of Airbus SE this week for a progress report on key programs.

Joyce will press Guillaume Faury for certainty around the handover of bespoke A350 jets the Australian carrier has ordered for non-stop flights to Europe and the US, together with a slew of A320s vital to upgrading the short-haul fleet.

The A350s require certification of additional fuel tanks needed for the 20-hour flights, while Airbus is struggling to fulfill ramp up plans for A320-series models amid labor and materials shortages at key suppliers.

“I think every airline would be after certainty on the time-frames,” Joyce said in an interview Wednesday. If deliveries come “a month later it doesn’t make much difference, if it’s six months or a year, that can make a big difference.”

Joyce, speaking on the fringes of the World Aviation Festival in Amsterdam, said he’s “quite happy” with communications from Airbus and that there’s so far been no indication of any slippage in deliveries.

Qantas signed a contract for 12 A350-1000s this year after its board stood by the Project Sunrise program as aviation began to emerge from the coronavirus crisis. The planes are slated for delivery from the end of 2025, with three due to arrive each year. The service, priced 30% higher than a two-leg trip, is likely to begin with flights to New York, followed by London, the CEO said.

Discussions on the A350 project, part of an annual briefing with Airbus, will include “how on track it is” and ensuring that weight requirements -- crucial to fuel burn and profitability -- are met, Joyce said, as well as an update on fuel-tank certification.

The meeting will also include narrow-body program updates, he said, with Qantas scheduled to take delivery of A320neo, A321LR, A321XLR and A220 models from this year.

Airbus cut its overall 2022 delivery goal along with the pace of the short-term ramp-up in July.

Joyce said he doesn’t see demand for Project Sunrise flights undermining the market for two-leg trips via Dubai, given the price differential, and that joint venture partner Emirates understands that the offerings will be complementary.

Demand on London-Australia routes is currently “really, really strong,” he said, with Britons still booking flights on Qantas despite the weakness of the pound. He said a decline in the Australian dollar has helped cushion the impact.

(Updates with further comments from CEO starting in seventh paragraph)