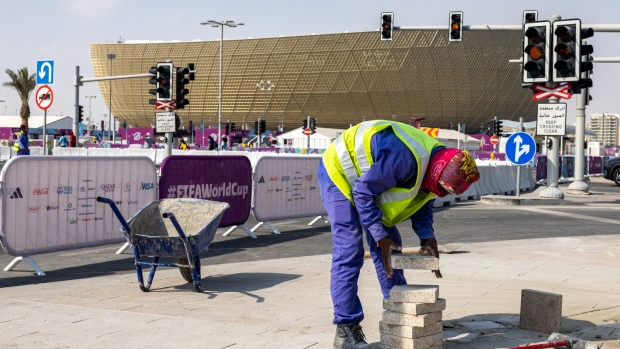 A labourer works outside Lusail Stadium in Doha in Nov. , Photographer: Christopher Pike/Bloomberg

(Bloomberg) -- Qatar has spent $300 billion in preparation for the most expensive World Cup ever. That construction boom is now revealing a concerning health cost to workers toiling in many of the hottest countries around the world.

Over the past decade, deaths of workers involved in World Cup related construction in Qatar drew global attention to their working conditions. Yet researchers say there’s an even broader problem emerging among low-income migrants across hot regions from the Middle East to Central America -- an epidemic of chronic kidney disease.

“Many workers returning from the Persian Gulf, and indeed those that worked to build the infrastructure required for the World Cup in Qatar, left their home countries healthy and returned with kidney disease after being exposed to extreme temperatures and brutal conditions while at work,” said Jason Glaser, CEO of the international climate and health research organization La Isla Network.

Meanwhile, research by La Isla has also documented a link between the incidence of chronic kidney disease in other parts of the world, including among sugarcane workers in Central America that’s likely linked to their heavy work in high temperatures.

Medical professionals warn that as climate change leads to longer and more frequent heatwaves, the number of people suffering from kidney disease will increase, affecting a wider swath of the globe -- making it vital to reexamine labor laws and occupational practices.

“We think companies should assess – in both their own operations and their supply chains – whether local laws and regulations are sufficiently protective against heat stress, and implement best-practice policies where they are deemed to fall short, or do not yet exist,” HSBC Holdings Plc said in a June report.

Heat stress can generate a whole range of risk factors that stop the kidneys from functioning properly, ranging from dehydration to total metabolic system shutdown, according to the National Kidney Foundation.

There are few statistical reports on the subject. In a survey of 38 kidney doctors in Nepal last year, 92% of the physicians said that kidney disease among returnee migrant workers from the Gulf was unlikely to be caused by underlying health issues, with the authors suggesting that work conditions in the extreme heat had likely fueled the condition.

The World Cup has set in motion at least some changes. FIFA says scrutiny around Qatar’s preparations prompted labor reforms, including more stringent inspections of construction sites meant to ensure the safety of workers. Qatar also has projects to address other potential hazards like heat, nutrition, or mental health, FIFA said.

In a statement, a Qatari government official said that it has taken extensive action over the past decade for worker safety, pointing to a report by the International Labour Organization, which said there had been a significant reduction in heat stress related health issues.

Last year, the country expanded restrictions on the hours laborers can toil outdoors between June 1 and Sept. 15, though high temperatures above 100 degrees Fahrenheit persist through much of October.

A group of organizations including Amnesty International, Human Rights Watch and FairSquare have called for at least $440 million more -- the value of the prize money at the World Cup -- to compensate workers for a variety of grievances. Organizers have said only some of the deaths on World Cup sites were work related.

Researchers say they’ve seen chronic kidney disease among returnees from a string of other countries in the region, from Saudi Arabia to the United Arab Emirates. The Saudi government’s Center for International Communication didn’t respond to a request for comment. The UAE said in a statement that it has several rules, including restricted timings in direct sunlight during the hottest hours of the summer and other regulations to ensure hydration and protect workers.

Still, workers and rights groups argue that more needs to be done in hot regions given the extreme temperatures workers must navigate there. “It’s fair to assume that they have developed this kidney disease as a result of something that happened to them while they were there,” Professor Vivekanand Jha, executive director at the George Institute for Global Health in India, “And the most plausible explanation is this heat stress.”

In Bangladesh, Faruk Miah returned home from Doha, the Qatari capital, in 2018 after doing construction work on sewers for a French engineering company. His work sometimes exposed him to hot weather with temperatures rising as high as 50 degrees Celsius, Miah said.

“Once underground, I couldn’t distinguish between day and night,” he said. “Outside, it was too hot, much hotter than in Bangladesh.”

Two weeks after returning home, he felt tremors in his hands and his legs went wobbly at prayer time. Tests showed his levels of creatinine -- a chemical which is naturally produced by the body but spikes when kidney disease sets in -- had soared to 14.5.  Normal levels are closer to 1. He now requires regular dialysis, a procedure where excess waste and fluid is removed from the body.

Chronic kidney disease is a condition in which the kidneys are damaged and cannot fully filter blood. It’s also one of the the most expensive illnesses to treat. According to the International Society of Nephrology, many developed countries spend 2–3% of their health-care budgets on treatment for patients with end-stage kidney disease.

Miah travels 25 kilometers by bus or autorickshaw to the local state-run hospital, at least twice a week, to undergo dialysis. It costs him about 3,000 taka ($30) a week, which he gets from relatives and friends as he doesn’t have a source of income. He also needs to feed a family of five. “Now I spend my time lying in bed most of the time,” Miah, 48, said in a phone interview from his village in southeastern Bangladesh. “I was the only breadwinner in the family, but I can’t work anymore.”

Qatar has also established a series of funds and mechanisms to try and compensate workers and their families for potential issue like wage theft and labor disputes, but rights groups have argued that the funds are too limited and inaccessible to help injured workers. They’ve also argued that rules requiring workers to present documentary evidence of the abuse create impossible standards. Kidney disease, which can take years to show up, can have its own documentation challenges.

The condition is being documented among manual workers well beyond Qatar and the Middle East. Glaser says he’s recorded a similar pattern in India and Mexico, with other researchers seeing it in Cameroon, Indonesia and Thailand. The International Labour Organization estimates that 19% of working hours will be lost to heat stress in 2030, a productivity loss equivalent to 80 million full-time jobs.

“We are already seeing an increase in heat waves with subsequent increase in heat stroke and kidney damage in the USA, EU and likely Australia,” Glaser said. He expects the list of affected places and groups to only broaden as the climate continues to warm.

--With assistance from Jason Gale.