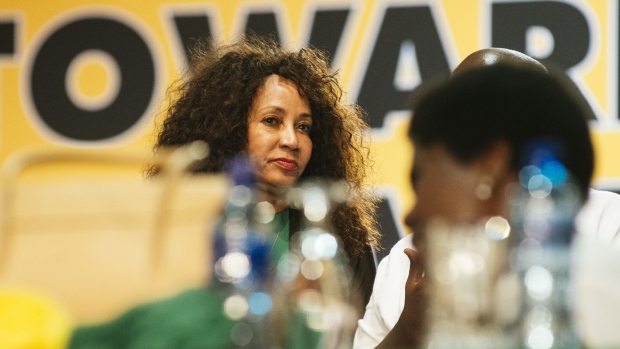 Lindiwe Sisulu, South Africa's minister for human settlements, looks on during the 54th national conference of the African National Congress party in Johannesburg, South Africa, on Monday, Dec. 18, 2017. With his election as leader of the ruling African National Congress on Monday, Cyril Ramaphosa, 65, will be the party's presidential candidate in 2019 and may take over running the country from Jacob Zuma sooner than that if he's ousted before the end of his second term. , Bloomberg

(Bloomberg) -- A potential showdown between South African President Cyril Ramaphosa and his Tourism Minister Lindiwe Sisulu failed to materialize at a meeting of the ruling party’s top decision-making structure on Saturday, CityPress reported.

Several attempts to introduce a debate about Sisulu’s contentious views on the constitution and the judiciary were thwarted during the meeting of the African National Congress’s national executive committee, the local daily said.

Confrontation had loomed after Sisulu publicly refuted Ramaphosa’s claim that she had apologized to him for criticizing the judiciary in an opinion piece that drew the ire of Justice Minister Ronald Lamola and Acting Chief Justice Raymond Zondo.

On Thursday, the presidency issued a statement saying Ramaphosa had met Sisulu and “admonished” her for the comments, which she had conceded were inappropriate and agreed to retract. That met with a riposte from Sisulu, who said in a statement that she stood by her assertions, had no intention of apologizing and accused the presidency of misrepresenting what transpired.

The standoff comes 11 months before the ANC is due to elect new leaders. Ramaphosa, 69, who’s expected to seek a second term, will now have to decide whether to fire Sisulu for her open defiance -- a move that could provide the impetus for a campaign by his detractors to have him replaced and have her appointed in his stead.

According to The Sunday Times, Ramaphosa’s backers are growing impatient and want him to act decisively against Sisulu, instead of taking a more circumspect approach. Members of the NEC made it very clear to the president that Sisulu had crossed the line, and action was required against her for undermining the president’s authority, the newspaper said.

Meanwhile, ANC chairperson and mining minister Gwede Mantashe told CityPress that “various forces” were trying to drive a wedge between him and Ramaphosa. The negative narrative against him has been driven by a foreign-funded campaign involving the “predominantly white liberal media,” research institutions and civil society groups intent on destabilizing his department’s work, the newspaper cited Mantashe as saying.

Mantashe previously held a close relationship with the president, but has found himself increasingly isolated within the party.

Ramaphosa is clear favorite to win the ANC leadership race in December, and will seek to name a team that can shore up the party’s popularity after its share of electoral support slumped to a record low of 46% in last year’s municipal elections.