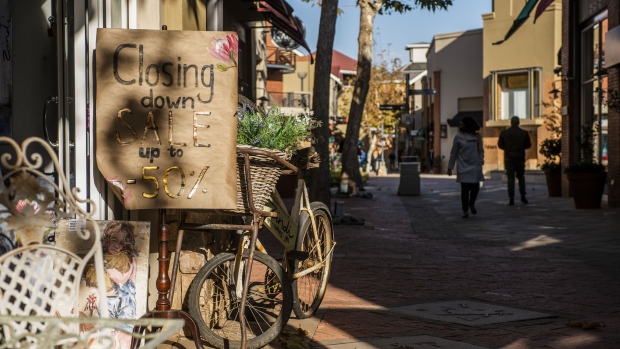 A closing down sign is displayed outside an art shop at the Irene Village Mall in the Centurion area of Johannesburg, South Africa, on Thursday, June 11, 2020. The near-decade of mismanagement and corruption under former President Jacob Zuma combined with the coronavirus outbreak and loss of South Africa’s investment-grade rating have left the economy in its worst state in the democratic era. , Bloomberg

South African President Cyril Ramaphosa warned of widening job losses as the effects of a shutdown to curb the spread of the coronavirus batters the economy.

Companies in the aviation, construction, entertainment and hospitality sectors have indicated plans to cut jobs because of heavy losses experienced in the past three months, Ramaphosa said Monday in his weekly newsletter. Small companies are being hard hit and some businesses are closing down permanently, he said.

South Africa’s unemployment rate for the first quarter, due Tuesday, is forecast to rise to 29.7%, according to a Bloomberg survey of economists. That would be the highest level in the statistics agency’s current data series dating back to 2008. Telkom SA SOC Ltd. and local Walmart Inc. unit Massmart Holdings Ltd. are among companies that announced plans to cut thousands of jobs even before the lockdown started on March 27.

“For a country which was already facing an unemployment crisis and weak economic growth, difficult decisions and difficult days lie ahead,” Ramaphosa said.

Africa’s most-industrialized economy could contract by 7% this year, according to central bank estimates. That would be the most since the Great Depression, when output fell by 6.2% in 1931, central bank data show. Finance Minister Tito Mboweni is due to table a revised national budget in parliament this week.