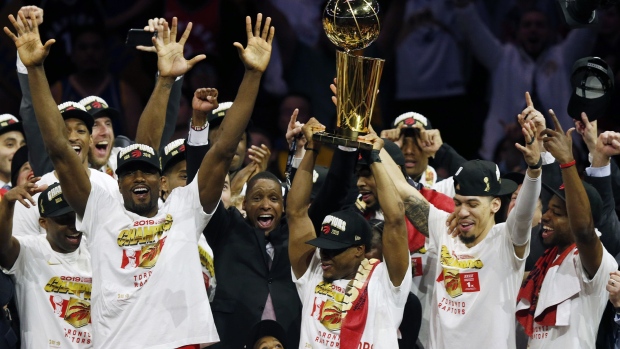 OAKLAND, CALIFORNIA - JUNE 13: Kawhi Leonard #2 of the Toronto Raptors celebrates with the Larry O'Brien Championship Trophy after his team defeated the Golden State Warriors to win Game Six of the 2019 NBA Finals at ORACLE Arena on June 13, 2019 in Oakland, California. NOTE TO USER: User expressly acknowledges and agrees that, by downloading and or using this photograph, User is consenting to the terms and conditions of the Getty Images License Agreement. (Photo by Lachlan Cunningham/Getty Images) , Photographer: Lachlan Cunningham/Getty Images North America

Maple Leaf Sports owners BCE Inc. and Rogers Communications Inc. are about to find out just how great.

The Raptors won their first National Basketball Association title on Thursday night, beating the two-time defending champion Golden State Warriors and, more important for the business side of the operation, elevating the basketball team’s stature and appeal in a hockey-mad city where it’s often all things Leafs, all the time.

“If they can get the Raptors equal to the Leafs, that would be a big jump in revenue,” Peddie said in an interview Friday. During his tenure, which ended in 2011, a Raptors sponsorship was usually tied to the hockey team, he noted. “Those days are gone.”

Earlier this year, Forbes valued the Raptors at US$1.67 billion, 11th in the 30-team NBA. The Maple Leafs were valued at US$1.45 billion in December, second in the National Hockey League.

The biggest and most immediate revenue bump from the Raptors championship will come from luxury-suite leases, Peddie said. Professional sports teams usually stack, or ladder, their suite contracts, meaning a certain number come up for renewal every year. For the Raptors, whatever inventory is available now -- and maybe in the near term -- will probably come with a hefty price increase.

As for ticket revenue, Peddie said it’s unlikely to yield a windfall. He said the Raptors had “already blown the doors off” renewals, and “I don’t think there are any more price increases to offer.”

BCE and Rogers will probably seek to explore more revenue opportunities in what they know best: content. Peddie said Maple Leaf Sports created a number of Leafs-related content initiatives during his tenure, including offering fans the ability to watch game highlights in an hour, then 30 minutes, and then five minutes.

“That’s why those companies bought Maple Leaf Sports -- they bought it for content,” he said.

Looking ahead, the Raptors face some uncertainty on the court. Among their free agents is Kawhi Leonard, who was the most valuable player of the championship series and who has become a fan darling. If he stays, the Raptors will probably be among the favorites to win the championship next season.

Unlike hockey, which has a number of teams in Canada, the Raptors are the country’s only NBA team. The championship run created new fans, nationwide, who are unlikely to abandon the club any time soon.

“That brand can sell nationally,” Peddie said. “That’s good for enterprise value. That’s where Bell and Rogers benefit -- and their shareholders.”